Though he’s an accomplished numbers cruncher, Bastian Solutions CFO John Smith doesn’t have the greatest timing. He signed on with his Indianapolis-based employer—a family-owned material handling system integrator—just as the Great Recession began.

At first glance the firm seems uniquely vulnerable to a downturn. After all, it supplies products and software that help factories move product around their facilities—activity that was sorely curtailed during the dark days of 2008 and 2009. Yet Smith helped to not only preserve the balance sheet, but also the workforce by arranging managerial pay cuts and decreasing work weeks in some divisions to four days. When things picked up, the company grew 34 percent from 2009 to 2011, all while accruing no long-term debt. 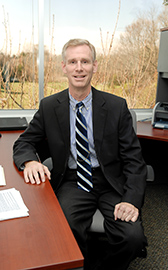 “When facing uncertain times, you must evaluate the situation, analyze the data, collect input from peers and associates,” Smith said. “But ultimately you must put plans in action.”

The company, with Smith’s help, is seeing a lot of action these days. He’s expanded Bastian’s presence by leading the team that set up new offices in Toronto, Sao Paulo, Sydney, and in Qatar and Saudi Arabia. All on top of his day-to-day responsibilities, including cash flow management, overseeing multimillion-dollar contracts, and managing risk.

“Bastian has opened several international business operations in the past two years,” Smith said. “Creating the financial and operational infrastructure to adequately support and make these units successful has created challenges at times. Along with the challenges, we have seen several of these businesses start to gain a foothold in their respective markets.”

One of Smith’s other talents is in explaining the company’s financial position, in plain English, to employees and other managers, often weaving in a joke or two among the dry numbers. And each year he works with Bastian’s department managers to produce new budgets. He must be an effective teacher, because in Bastian’s annual employee survey he’s always ranked highly in employee satisfaction.

Smith, whose former employers include Williams Comfort Air Inc., knows more than a little about running a family-owned enterprise. He started his own medical supply business, Smith Industries Inc., which he sold after two years for a profit.

While he’s “somewhat less optimistic” about macroeconomic conditions in 2013, he’s fairly sanguine about where Bastian is headed in the coming months. “Our revenues and loggings have been very strong for the first three quarters of 2012, and we are on pace for a record year.”•