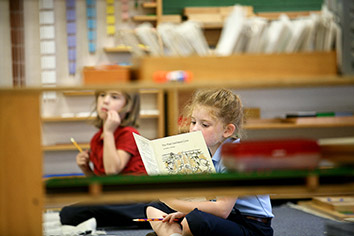 An attorney for the state's largest teachers union made a forceful argument Wednesday morning that Indiana’s new program for school vouchers sends money directly from the state treasury to private schools, nearly all of which are religious, and lets them use the money for any purpose, even religious instruction.

Therefore, John West, an attorney for the Indiana State Teachers Association, told the Indiana Supreme Court the voucher program should be declared an unconstitutional support of religious institutions.

But Indiana Solicitor General Thomas Fisher fired back that the voucher program serves a secular purpose of improving general education in Indiana and that state funds only go to religious institutions indirectly—when the parents decide to enroll their children in a private school.

Both attorneys then spent the rest of the hour-long session trying to respond to pointed questions and knotty hypothetical scenarios thrown at them by the five justices on the Supreme Court.

The Court issued no decision Wednesday about the program, which is currently giving scholarships of roughly $4,000 to 9,324 students around Indiana. A total of 289 private schools are accepting voucher payments from students, and nearly all of them of them are affiliated with a church or have a religiously based curriculum.

One of the main questions from the justices was how the vouchers for primary and secondary schools, which are known as Choice Scholarships, are any different than the 21st Century and Frank O’Bannon scholarships the state awards to college students, many of whom use them to attend religious colleges.

“Generally speaking, at the college and university level, the inculcation of religious beliefs in the students is not a central purpose of the university,” West countered.

But Fisher said that the choice exercised by students and parents is the same at the college level as it is at the primary and secondary level.

“This is not a qualitatively new kind of program,” Fisher said of the voucher program. He added, “The distinction between the university system and the primary and secondary school system that Mr. West is trying to draw just cannot be substantiated.”

Fisher also contended that because today’s parents can send their children to many kinds of schools—not only to traditional public districts in which they live, but also to nearby districts to which they can now transfer without charge and even publicly funded charter schools—that the addition of private schools as another viable choice does not amount to direct support of religious institutions.

But Justice Steven David pressed Fisher to consider a scenario in a county in Indiana where there were only two choices of schools: either a private religious one or the traditional public district. In that scenario, David said, doesn’t the voucher program constitute funding of religious schools?

“In that circumstance, you’re still having decisions made by parents,” Fisher responded. He added about the state’s constitutional authority: “It cannot give direct grants to religious institutions. But that is not the same as providing money to parents.”

But West noted that parents never actually receive a check from the state. Rather, they apply to certify themselves eligible for a voucher and then when they enroll their child in a private school, the state sends a check directly to the school.

“They come directly from the state to the schools,” West said of the vouchers. “It’s no different than the state providing funds to the school based on average daily membership.”

Average daily membership is a reference to the twice-annual count the state does of each public school’s enrollment. The state then makes a per-pupil payment to each school based on that enrollment.

State schools chief Tony Bennett, who along with Gov. Mitch Daniels is the co-defendant in the case, sat in the front row of the gallery, directly behind the attorneys as they made their cases.

Bennett, a Republican graduated from a private Catholic school, championed the voucher law, which the state Legislature passed in 2011.

Bennett, however, lost his re-election bid this month to Democrat Glenda Ritz, who was backed by the Indiana State Teachers Association. Ritz was a co-plaintiff in the lawsuit challenging the voucher law until announcing Tuesday that she had removed herself from the suit.

Ritz told The Associated Press she would drop out of the legal challenge before she takes office Jan. 14. Ritz says she is pledged to uphold state law as the new state superintendent, and remaining part of the suit would present a conflict of interest.