WXIN-TV Fox59 news anchor and reporter Eva Pilgrim is leaving the local station for a similar position at the ABC affiliate in Philadelphia. 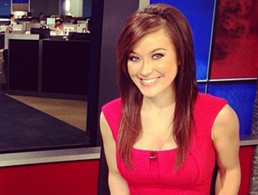 Pilgrim had risen from the morning news at Fox59 to anchor at 4 p.m. (Photo courtesy Eva Pilgrim)

She announced the move Monday via Twitter and on her blog, Everyday Eva: "When I got the call saying I got the job … I cried … unexpectedly," she wrote. "I was excited and happy but all of a sudden I realized how much I was going to miss Indy."

Her last day at Fox59 will be Wednesday.

"It's a no-brainer," Rosenthal said of Pilgrim's move to the much-larger media market. "It's a great job. It's great to see a good person go to a good place."

Pilgrim was born in Seoul, South Korea, and grew up in a military family traveling all over the United States before her family settled down in South Carolina, according to a Fox59 bio. She attended the University of Florida and University of South Carolina.