About to embark on his eighth trade mission since 2008, Indianapolis Mayor Greg Ballard is committed to keeping up the city’s international profile, regardless of whether that results in a major economic-development deal.

“Everybody thinks you need to go over there and bring back 500 jobs or something,” Ballard said. “That’s not really how things are done.”

The second-term mayor will leave Feb. 22 for India on a trip led by Develop Indy, a unit of the Greater Indianapolis Chamber of Commerce that serves as the city’s economic development agency. 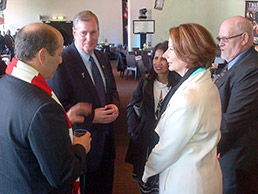 No foreign company has set up operations in Indianapolis as a result of locally organized trade missions, which began in 2008 at Ballard’s urging. Develop Indy has conducted 23 trade missions since then. Four more are planned this year, starting with the trip to India.

“The sheer amount of handshakes that have been done is a good metric to look at,” said Nancy Langdon, executive director of international economic development at Develop Indy.

Ballard isn’t the first Indianapolis mayor to go on trade missions, but he asked Develop Indy to come up with an international strategy. A retired Marine whose wife is Filipina, he said he was “astounded” to learn when he took office that Indianapolis didn’t have active international relationships.

That includes travel for Ballard, any members of his staff and first lady Winnie Ballard. Jane Gelhausen, director of international and cultural affairs, a security detail and Ballard’s wife will be on the Feb. 22 to March 2 trip to India.

The lack of deals so far is to be expected, said Dennis Kelley, principal at Indianapolis-based Pacific World Trade, which helps local governments establish relationships in China.

“That type of effort can be a five- to 10-year effort,” Kelley said. “If the mayor loses his job after four years, the whole thing could go down the tubes.”

Atlanta-based consultant Mike Gomez is less forgiving. He thinks Indianapolis could have attracted one or more small firms, if not a large corporate presence, in four years.

“By now you would have seen whether or not the campaign you’re launching has some attraction to small and midsize companies, who don’t take four years to make a decision,” said Gomez, president of Allegro Consulting.

Ballard said the international work has helped local companies. He cut the ribbon on a Hyderabad office for Indianapolis-based Sahasra Technologies when he first visited India in 2010. Traveling with Ballard to China last year, Ratio Architects Inc. signed an agreement with Zhejiang Institute of Design, which means Ratio will be allowed to design projects in that province, which has a sister relationship with Indiana.

“The level of access you have to certain officials on a trade mission can be higher,” Ratio partner Tony Steinhardt said.

Those priorities are based on a variety of factors, including economic growth and the strength of industry clusters like life sciences, she said.

One of Ballard’s goals when he took office in 2008 was to double the number of sister-city relationships by 2010, and he accomplished that.

One might think of a sister city as a quaint cultural exchange, but economic development has become the program’s main objective, Kelley said.

The point of sister-city relationships is for the mayors to visit each other, so they both gain firsthand experience, which they can relay to business contacts, said John Sampson, CEO of the Northeast Indiana Regional Partnership.

He helped encourage the relationship Fort Wayne established with Taizhou, which is the second-largest city in Zhejiang.

“It’s not rocket science,” Sampson said. “It’s something a mayor can really get his arms around and articulate to his constituents—why that relationship, you can get benefit from it.”

Ballard will revisit Hyderabad, capital of the southern state Andhra Pradesh and a pharmaceutical center, during this month’s trip. Soon after Ballard’s first trip there in 2010, the mayor of Hyderabad came to Indianapolis.

“We’ve really been focused on getting companies and clients to visit Indianapolis,” she said. “It’s not just about going there.”

More cities, including small Indiana communities like Anderson and Marion, are participating in trade missions. Where Americans tend to fall short is on t

“If you send a group to China, for example, and they meet businesses, who is going to be in that country to follow up on those trade leads or business

leads for that city?” Kelley asked.
Develop Indy doesn’t have its own consultants overseas, but Langdon said she maintains contact year-round with lawyers and real estate professionals.

Langdon said Australia is still promising for Indianapolis. It’s so far away that shipping to the United States is not practical, so Australian companies wanting to expand here would likely establish a presence. A few Australian firms already have a presence in Indianapolis. One is CSL Ltd. of Parkville, Australia, which has a plasma distribution center on the north side.
Langdon encouraged Ballard to go on an Australian trip in September because his presence gave the delegation access to high-level elected officials and executives at CSL. There was a breakfast with the U.S. ambassador, and Ballard met Prime Minister Julia Gillard at the Australian Rules Football championship.

Ballard said he was interviewed on Australian television about having hosted Super Bowl XLVI.

While Develop Indy is focused on business opportunities, Ballard doesn’t think his globe-trotting has to be all about trade. In fact, he said he doesn’t even use the term “trade mission” for his trips.

All the city’s international activities, including librarian and firefighter exchanges, are important, Ballard said. In September, he’ll go on the chamber’s Leadership Exchange to Germany, and he plans to make side trips to Piran and Monza because, as far as he knows, no Indianapolis mayor has ever visited those sister cities.

Ballard also hopes to take an international trip dedicated to veterans and military personnel, though he won’t reveal details.

“You have to look globally if you’re going to be a strong city,” Ballard said.

He added that overseas travel is not a vacation for him. “It’s tiring. Physically, this is exhausting stuff.”•