A locally based developer has received federal tax credits that should enable it to move forward this year with a $13.1 million apartment project at the former Central State Hospital campus on Indianapolis’ west side.

The Retreat on Washington would be Pedcor Cos.’ second at the 150-acre property along West Washington Street, near Tibbs Avenue. It completed the 144-unit The Steeples on Washington in December. 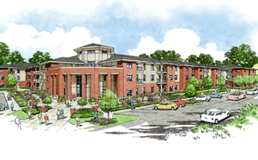 The Retreat on Washington will focus on affordable housing for seniors. (Rendering/Pedcor Investments)

The Steeples on Washington, which serves residents earning 60 percent or less of median income, is fully occupied and even has a waiting list of more than 200 people, said Craig Lintner, Carmel-based Pedcor’s senior vice president of development.

The success of that project led Pedcor to pursue another development at the former psychiatric hospital site. It was able to move forward with The Retreat on Washington, which will be senior housing, after receiving $1.2 million in federal tax credits in late February.

“It’s a little more palatable [to neighbors],” Lintner said. “They can picture their grandparents or their mom and dad living there.”

Pedcor, which is best known for its ambitious City Center project in Carmel, plans to break ground in August or September and finish construction in about a year.

“The Steeples project, from everything I’ve heard, has done phenomenally,” he said. “There’s just not much nice apartment housing in that area.”

Pedcor is working with the neighborhood's Hawthorne Community Center to moveits senior services, office and kitchen area to The Retreat building.

The $20 million, seven-building Steeples project is the only new development so far at the former Central State, which closed in 1994. Pedcor received $2 million in federal tax money to help finance it.

Interest so far has been slow to build, but more residents in the area may spur activity.

Higbee is pleased to see Pedcor expanding its residential ambitions for the site.

“We think it really works well with everything else we’re trying to accomplish,” he said.

Higbee and Garcia hope to have a commitment from a tenant by summer that would allow them to move forward with retail construction along Washington, east of the new Central Greens Boulevard. If the tenant doesn't materialize, building spec space might be possible, Higbee said.

The two also are planning their own housing development, Urban Residential Village, on 40 acres in the site’s northeast quadrant. The project would be a mix of bungalows, townhomes and, possibly, a mid-rise building.

The development could total 600 units. Ground breaking might occur between September and March, Higbee said.

Higbee and Garcia also hope to redevelop the three-story, 30,000-square-foot Central State administrative building that still stands. A use has yet to be identified.