If you saw only the Ai Weiwei works in the lobby of the Indianapolis Museum of Art, you might jump to the erroneous conclusion that they were created by a whimsical artist, playfully making the familiar (bicycles, crabs) seem unusual.

See only the first wall of photographs—with the artist flipping the bird to the White House and Tiananmen Square—and you might assume this artist is all about anger. 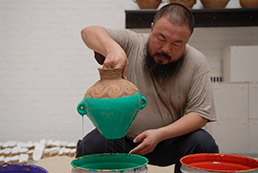 But take in the entire exhibition and a more complex mind emerges. The fact that the works seem part of a puzzle makes “Ai Weiwei: According to What?” different from most other solo exhibits. 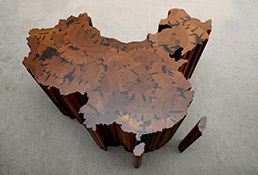 Above: “Colored Vases” is among Ai Weiwei’s transformative works. Below: “Map of China” (Photos courtesy of Ai Weiwei)

It’s difficult to see his substantial wooden “Map of China” and “China Log” (both constructed from the wood of dismantled Qing Dynasty temples) as separate from the numerous photos along the walls that portray a complex, contemporary China.

And it’s even harder to separate the wall-covering “Names of the Student Earthquake Victims Found by the Citizens Investigation” from the work that lies before it: “Wenchuan Steel Rabar,” constructed from materials from the flimsily made schoolhouse where the listed students died. (The construction of the piece had profound political ramifications for the artist, including arrest.)

But why think of them as separate pieces? The joinery techniques that make “Grapes,” a combination of 40 wooden stools, so engaging is also on display in the simpler “Table with Two Legs on the Wall.” Those pieces connect with “Kippe,” which incorporates gymnastic parallel bars. And all flow into the exhibit-dominating “Moon Chest,” consisting of seven (out of 81) large hauli wood pieces whose positioning influences its interpretation. Enter the show and you enter a busy, creative, thoughtful, frustrated, angry, intense mind.

Allow extra time if you want to sit through the just-under-an-hour film. The fact that you have to go through much of the exhibit before entering the screening room is both appropriate and telling. The layout gives you a chance to experience the work before the back story. It allows you to react to the creations, to some degree, before you get to the creator.

Yes, the puppetry is staggering. And, yes, adults are likely to be reaching for the tissues. But the most remarkable thing about “War Horse” (which I saw with a busload of readers on the April 6 IBJ A&E Road Trip to Cincinnati’s Aronoff Center) is that it exists at all. 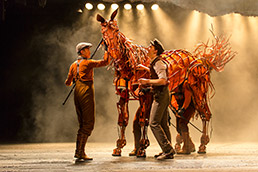 The intricate puppetry of the Tony-winning “War Horse.” (Photo/ Brinkhoff/Moegenburg)

Consider the pitch: OK, we want to make this play based on a children’s book told from the point of view of a horse. Yeah, kind of like “Black Beauty,” only it’s set during World War I so we have lots of carnage and overriding sadness about the human condition. The main character? The horse, of course—and it’ll be played by a puppet that needs three people to operate. At least, we think it does because we haven’t quite figured out how to do that yet. And, no, the horse doesn’t sing.”

Sound like a show you’d invest in? Remember, too, that this was before Stephen Spielberg offered his far more conventional cinematic take on the deceptively simple story.

But against all odds, on stage, “War Horse” became a triumph in London and New York. And I’d give primary credit not to a single artist but to a process. The National Theatre of Great Britain gave the show’s creators the time and care that typical commercial producers or even most regional theaters couldn’t dream of. In its road to the stage, “War Horse” was given time to stumble, to find its legs, to take the wrong turn and circle back.

The care is clear on stage, where horses (and a pesky goose) seem as alive as the human cast members, where the transitional music seems to emerge from the characters not from a composer, where big truths are played in intimate ways, and where the animals behave like animals, not as people in disguise.

The seemingly uncompromised tour—with a cast of dozens and its gloriously simplistic design intact—is even rarer when you consider how few non-musical Broadway productions hit the road these days.

Here’s hoping “War Horse” stays on its feet long enough to be part of the 2014/2015 Broadway in Indianapolis season.•