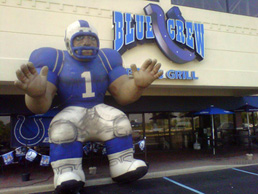 The Blue Crew Sports Grill at 7035 E. 96th St. shut its doors Thursday, according to a post on the eatery’s Facebook page. Phone calls to the 7-year-old restaurant were not immediately returned.

“Attention Colts fans, I can’t believe I’m typing these words, but the Blue Crew Sports Grill is closing its doors,” the post said. “We’ve been struggling to stay open for a long time, but we’ve just lost too much money to keep going. As of this morning, we’re closed.”

The message continued: “We’ve enjoyed being the #1 destination for Colts fans for a long time, and we’ll miss all of you.”

It quickly became a popular hangout to watch the team’s games. But questions persisted about its ability to draw a crowd during the offseason.

The restaurant was outfitted floor to ceiling with Colts memorabilia, big-screen televisions and a huge horseshoe-shaped bar.