Two growing Hamilton County communities looking to build their commercial tax base are taking steps to ensure land targeted for development doesn’t end up in the hands of organizations that don’t pay taxes.

Fishers’ Town Council last month passed an ordinance prohibiting “institutional” uses on property along Interstate 69 from 96th Street to 126th Street, a decision that forced Noblesville-based Grace Community Church to give up on plans to add a campus a stone’s throw from the highway. 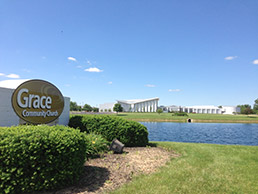 In Noblesville, the Common Council OK’d a measure that allows not-for-profit entities to be located in prime economic-development areas—but only if they agree to make payments equal to the amount of property taxes the land would have generated.

“We have spent a lot of money to essentially turn bean and cornfields into developable commercial property,” said city attorney Mike Howard, and tax revenue from those sites is used to pay off the resulting debt.

But if the land is snapped up by churches and other tax-exempt organizations, someone else has to pick up the tab.

As post-recession development gains momentum and municipalities get used to the realities of Indiana’s new property-tax caps, officials are looking for ways to avoid leaving money on the table.

The idea of collecting fees from tax-exempt entities isn’t new, but such arrangements typically are proposed on a case-by-case basis for major projects, such as the Indiana University Health Hospital in Carmel. Noblesville is the first city in the area to formalize its policy.

Noblesville and Fishers may have different approaches, but their objectives are the same: to ensure the long-term financial health of their communities.

Commercial activity is the “economic lifeblood” of any city or town, said Tom Dickey, Fishers’ director of community development. Given the connection to both job creation and property values, he said, it doesn’t make sense to allow potentially lucrative land to be tied up by tax-exempt users.

“That’s valuable space not being filled with jobs,” he said.

Officials evaluated the town’s commercial opportunities and zeroed in on the I-69 corridor, still sparsely developed despite decades of growth. Town planners picture it lined with clusters of upscale office buildings with tax-paying tenants.

Planners are working on a broader zoning ordinance that would govern design standards as well as allowable uses, but town leaders wanted to send an immediate message to not-for-profits like Grace Community, which had picked a site off 106th Street just west of I-69.

“We wanted to stay consistent with the vision of a commercial corridor,” said Town Manager Scott Fadness. “We want churches and other nonprofits, but we need to be sensitive to where they are located.”

Grace, a 15,000-member Noblesville-based church, has been contemplating a Fishers campus because about a quarter of the congregation lives there, Senior Pastor Dave Rodriquez said.

Its first choice was a former medical center just east of I-69 at 11201 USA Parkway. After the landlord backed out of that deal, First Internet Bancorp swooped in. The bank plans to invest $4.3 million to expand its mortgage operation there.

Grace then focused on building a facility on the 106th Street site, near a planned I-69 interchange.

“We invested a significant amount of money there,” Rodriguez said, declining to be more specific.

He told Town Council members as much during the May 13 meeting where they approved the ban on institutional uses. Church leaders were disappointed by the decision, but Rodriguez said they understand it.

“It’s a growing community and tax revenue is important. It just didn’t work for us,” he said. “We’re not bitter or anything. … We want to be good neighbors to the town of Fishers.”

Noblesville officials didn’t want to dictate where not-for-profits could locate, Howard said, but they didn’t want to give up tax proceeds from potentially valuable property, either.

About $158.5 million in public money has gone into getting Noblesville land ready for development, according to the ordinance, and revenue from tax-increment financing districts throughout the city covers annual debt payments of more than $12 million.

The bigger the commercial tax base, the lower the burden on residential property owners, Howard said.

“Commercial assessed value really funds government services,” he said. With the state’s homestead deduction and residential caps, he added, “the taxes generated by a $130,000 house barely pays for trash pickup.”

Under the measure approved May 28, tax-exempt users of property in the TIF districts must agree to a so-called payments in lieu of taxes—or PILOT—deal, contributing the same amount to city coffers that a taxpaying entity would.

Not-for-profits have plenty of options outside the city’s TIF districts that wouldn’t trigger such payments, Howard said.

“There’s a finite amount of developable land—beachfront property, as I call it,” he said. “We made an investment there, and we need to get tax revenue to pay for it.”

A municipal attorney for more than 20 years, Howard said it’s wise for communities to formalize a policy rather than handle projects on a case-by-case basis, as many cities do. Without something in writing, it’s too easy to be accused of playing favorites.

“We want to be able to explain to a judge someday why we did this and why we think it’s legal,” he said.

PILOT arrangements are increasingly common, said Daphne Kenyon, a visiting fellow at the Massachusetts-based Lincoln Institute of Land Policy’s Department of Valuation and Taxation. More than 200 communities—mostly in the Northeast—have received such payments since 2000, according to the institute’s latest research on the topic.

But such arrangements are “often haphazard, secretive, and calculated in an ad hoc manner that results in widely varying payments among similar nonprofits,” Kenyon and colleague Adam H. Langley wrote in a 2010 report.

Officials should be open when implementing such deals, Kenyon said, which are a way to make tax-exempt entities pay something for public services like police and fire protection.

“Make the case to nonprofits and the community at large: ‘Look, we’re constrained on revenue and the TIF district is important for our fiscal health,’” she said. “‘We’re looking for you to be good citizens. Can you help us out?’”

Kenyon was not previously aware of Noblesville’s PILOT ordinance, but she said it is “very rare” for the not-for-profit’s payment to equal the property tax assessment. More typically, it represents a fraction of the total tax bill.

Howard said Noblesville hasn’t pulled the trigger on a PILOT agreement yet, though it tried to stipulate one when not-for-profit Clarian Health was eyeing property for a hospital at 146th Street and Hazel Dell Parkway about a decade ago.

At the time, the hospital was owned partly by a physician group, giving it for-profit (and taxpaying) status. But City Councilor Luci Snyder said officials negotiated a PILOT agreement that would take effect if the hospital became tax-exempt. It did, and IU Health now is required to make semiannual payments at tax time.

IU Health is one of just two not-for-profit entities in Carmel making PILOT payments, and it’s the only not-for-profit hospital in the city with such an obligation. St. Vincent Carmel entered the market long before the deals were common, and Franciscan St. Francis Health Carmel opened last year in rented space.

Snyder thinks the city missed an opportunity by not guarding against the possibility that the hospital eventually will buy the building, removing it from the tax rolls.

“I would certainly support a law requiring PILOT agreements for not-for-profit entities,” she said.

Westfield Mayor Andy Cook said he is watching how other communities formalize their policies, which is more important as development picks up. Westfield is expecting a burst of commercial growth after the 400-acre Grand Park Sports Complex opens next year.

“We’ll have to see what our neighbors’ experiences are,” Cook said. “I try to learn from those people.”

The topic also is on the table across the county line in Zionsville, where town officials are embracing commercial development after decades of focusing on residential growth.

“We are exploring the issue,” Town Manager Ed Mitro wrote in an email. “We recognize the value in a fair balance for nonprofits, but [we] also realize that with today’s tax caps, a much greater burden is placed on towns to provide the services needed by all entities regardless of their tax status.”•