Sitting in his car outside the home of billionaire Indiana Pacers co-owner Mel Simon, Jonathan Bender was thinking about the difference between “getting paid” and “developing a process to make money.”

Bender, not far removed from being drafted into the NBA with the No. 5 overall pick in 1999, wasn’t an invited guest to Simon’s house that day. He merely rolled by to see how a successful businessman lived.

He watched from a distance—on that day and others—and took note of what made the shopping mall magnate successful. The late Simon, Bender said, probably never even knew he was one of Bender’s role models.

Wondering about Simon, his business dealings and lifestyle might seem an odd thought for a teenager who had recently signed a three-year, $7 million contract with the Pacers.

What more could an 18-year-old want? After all, he was sitting in a shiny new Mercedes and had recently become the richest person from his hometown of Picayune, Miss.

But those who know Bender best said that sense of wonderment is one of the factors that make him much more than a great basketball player.

In April, Bender launched a company based on an odd-looking device he invented to help others avoid the knee troubles that put an end to his promising NBA career. Already, he’s brokered a deal with California-based Relax The Back retail chain, which sells wellness, fitness and medical items coast to coast.

On that day sitting in front of Simon’s house, Bender, who passed on college to leap to the NBA, took his first business course. And it wasn’t just Simon’s riches that fascinated the teen. There was something else.

“He was self-made,” Bender said. “Down in Picayune, there aren’t many role models like that—people who have picked themselves up and created a process, a plan for the rest of their lives, and made a legacy to benefit others.”

Benefitting others for Bender includes people in Indianapolis. While he and his company are based in Houston, the foundation he formed in 2007 provides children in Indianapolis, Picayune, New Orleans and Houston with skills to succeed in business and life.

Long before his knees gave out, ending his seven-year career with the Pacers, Bender was thinking about life after basketball.

Even after signing a four-year, $28.5 million contract following the 2001-2002 season, Bender couldn’t stop thinking about his “long-term future.”

“He was always a quiet guy,” said Donnie Walsh, who was Pacers president when Bender was drafted. “After a while, you realize that behind all that quietness is an extremely thoughtful guy. And a very smart guy. You could see that in the way he played, but also in the way he handled himself off the court.”

Bender was as eager to talk about business as basketball, Walsh noted.

“I’m not surprised he’s gotten into business after his playing days,” Walsh said. “He always had the interest and drive.”

To many NBA followers, Bender’s fairy tale ended tragically. So much promise on the court and so little to show for it. Seven years with the franchise averaging fewer than six points per game isn’t much for a guy once compared to Magic Johnson. Pacers officials still lament his unrealized potential.

“If he hadn’t been hurt, he’d have been flat-out great,” Walsh said.

But Bender insists he’s still penning the pages of his own masterpiece story. In most circles, that tale has gone mostly untold. Some people know Bender made an unlikely comeback in 2009, signing and playing for the New York Knicks.

Most don’t know the story behind the comeback. And though the comeback was short-lived, with Bender exiting the NBA once and for all in 2010, the 32-year-old hopes the most important part of this drama is just beginning.

“This is what I’ve been planning for,” Bender said. “Life after basketball.” 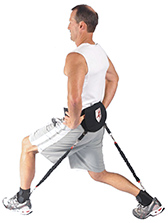 Inspiration on a park bench

After announcing his retirement from the Pacers in 2006, Bender was sitting in a Houston park watching people run and walk by when it hit him.

In his mind, he could see a device that acted as an external hamstring, which could exercise the hips, glute and quad muscles without putting pressure on the knees.

With duct tape, ankle weights, thick rubber bands and office binder clips he bought at an area drugstore, Bender made the prototype for what he now calls the JB Intensive Trainer. Bender invested a little more than $80,000 into his invention, which he now contracts to have made in China and sells for $130.

As it turns out, Bender was doing more than sitting on a training table getting treatment during those years in Indiana. He was watching closely and listening, including to Dr. Dan Dyrek, a Boston physician who has worked on numerous Major League Baseball and NBA stars, including Pacers executive Larry Bird during his Boston Celtics playing days.

“I watched and learned from what they did and what they said about things like injuries and muscle structure,” Bender said. “I soaked it all in.”

Over the next three years after that day in the park, Bender worked on his device, wearing it to strengthen his own legs. So impressed was Walsh, he decided while working in the New York Knicks front office to give Bender another tryout. There was no shortage of skeptics.

“When I went there, I was proving a point to myself,” Bender said. “I wanted to prove my product worked.”

Knicks doctors at the time said Bender had the strongest lower extremities on the team. Bender averaged nearly six points a game during his season in New York. It was a long way from an all-star-caliber season, but not bad for a guy medical experts said would never play again.

Following the 2009-2010 season, Bender said he had offers to play in the NBA, but he opted to focus on his business endeavors.

“Basketball didn’t mean as much to me as it once did,” Bender said. “I was on a different journey. I was consumed by my interests in being in business and desire to be an entrepreneur.”

Looking back, Bender said, the journey was set in motion through his observations of Mel Simon.

Bender had firsthand mentors that helped him along the way as well. The late Billy Ray Hobley, a former Harlem Globetrotter, helped train Bender in high school—physically and mentally. Later, Bender said, Robert Tanko, a Houston-based manufacturing and distribution business executive, took him under his wing.

‘More than a product’

Tanko, Bender said, helped him learn that, in business, “there is no ceiling” to what can be achieved.

“It’s easy being around nothing but other ball players and thinking that’s the top level of what you can achieve,” Bender said. “I wanted to do more.

There’s nothing more important to Bender than family and his faith. He talks at length about his many nieces and nephews and young cousins.

“I don’t want them to look at me as a former NBA player who made some money and now my career is over,” Bender said. “I want to show them that there are other options to explore their talents and gifts.”

It’s the “iron-clad work ethic” Bender developed as an athlete that has pushed him to success in business, said Bryan Davis, who has known Bender since elementary school.

That drive pushed the JB Intensive Trainer to market.

“He put that thing in front of anyone and everyone he could,” Davis said.

One of the people he put it in front of was Eric Nauman, director of Purdue University’s Human Injury Research and Regenerative Technologies Laboratory.

Nauman, a professor in mechanical and biomedical engineering, called it “one of the more intriguing devices” he’d seen.

“The product is completely counterintuitive,” Nauman said. “At first examination, it would appear to put more force across the knees, but because of the way it’s engineered, it actually takes pressure off the knees by evening out the load and making the legs work the way they’re supposed to work.”

Nauman even authored a white paper on the product and is confident that articles he is writing about it will get published in various medical and academic journals.

Nauman was as taken by Bender as his product.

“Jonathan has an amazing intuition and sometimes intuition is better than a calculator,” Nauman said. “Even if you tell him things should work a certain way, he continues to ask, ‘Why, why, why?’ He has an incredible drive to build a better mousetrap.”

The JB Intensive Trainer is not his only—or last—business endeavor, Bender promised. He has interests in the oil and chemical industries.

“I’m working on a few projects right now, but they’re under wraps,” he said.

“This is a guy who has had to learn a lot of things by doing,” he said. “One of the things I really admire about him is that he’s not afraid to make mistakes.”

And yes, there have been mistakes.

“At first, he was all over the place with his business ideas,” Davis said. “He had a record company, did concert promotions and dabbled in real estate. Finally, he learned that slow and steady wins the race.”

Bender has few regrets about the path he’s taken—including bypassing college for the NBA.

“I’ve failed a lot,” he said. “I’ve stubbed my toe here and run into a brick wall there. But nothing beats experience.”•