The then-president of Indianapolis Downtown Inc. anxiously told the CEO of Flaherty & Collins Properties to turn on his television because she thought the firm’s downtown Cosmopolitan on the Canal project was on fire.

Flaherty flipped on a 5 a.m. newscast and felt relieved when the reporter referenced condominiums. The Cosmopolitan, after all, is an apartment development. 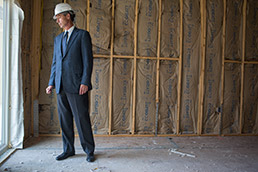 Axis at Block 400, Flaherty & Collins’ latest downtown project, is set to open in late June near another of his mixed-use developments, the Cosmopolitan. (IBJ Photo/Aaron P. Bernstein)

His relief quickly turned to desperation when he realized it was indeed his building, still under construction, going up in flames.

“It’s a helpless feeling,” Flaherty, 55, recalled. “There’s nothing you can do. It’s very disheartening.”

The $33 million apartment project, thought to have been set ablaze by a homeless man, was declared a total loss. What stung the most: A sprinkler system was scheduled to be installed within two weeks of the blaze and tenants set to move in within a few months.

But Flaherty & Collins managed to quickly rebuild. Today, the project is lauded by many as the first real downtown mixed-use development that launched the trend now so prevalent throughout the urban core.

“I think Dave Flaherty has had a vision and has been way out in the front end of that,” said John Sebree, national director of multifamily housing at real estate brokerage Marcus & Millichap. “You

have to give him credit for having the vision to develop that project at that time in Indianapolis.”

The project helped propel his firm from a builder of typical suburban apartments to a major player in urban infill residential development. Flaherty & Collins since has sold a stake in the building to an outside investor.

Like many of the other downtown mixed-use projects, though, the residential units have leased up nicely while much of the ground-level retail space has remained vacant. Flaherty hopes that will change with its mammoth project that’s being built across the street from the Cosmopolitan.

The $85 million Axis at Block 400, bounded by Michigan and Vermont streets and Capitol and Indiana avenues, features 337 units, making it the biggest apartment project undertaken downtown in years. Tenants are expected to start moving in toward the end of June, and a 42,000-square-foot Marsh grocery store that anchors the project is set to open May 15.

At about the same time, construction is set to begin on what could be considered Flaherty & Collins’ highest-profile project—its $81 million, 28-story retail and residential tower on a portion of the Market Square Arena site.

The firm beat out four competitors in a bidding process led by the city, which is contributing $20 million in financial assistance, for the rights to develop the site, cementing Flaherty & Collins’ status as one of the city’s top multifamily developers.

“I don’t think we’ve ever been [more] focused or jazzed up about a deal than that one,” Flaherty said.

Flaherty is the leader and face of the firm by way of his experience as a developer. He founded the company in 1993 with Jerry Collins, president, who heads the property management and operations side of the business.

The two met while working at Revel Cos., now Revel & Underwood Inc., in Fishers, and decided to start the business with just a secretary and an eye toward property management and brokerage. It was Flaherty’s idea, recounted Collins, who manages 13,000 rental units in six states.

“Dave’s been a great partner for me,” Collins, 59, said. “I trust him, and we’ve always been honest with each other.”

Flaherty gleaned his development skills at Revel in the early 1990s by entering the affordable-housing market. He had joined the company in 1984 after earning a law degree at the Indiana University School of Law in Indianapolis and was splitting his time between development and legal work.

Flaherty graduated in 1981 from IU in Bloomington with a business degree concentrating on real estate.

His interest in real estate and how development deals get done dates to his growing up in Nappanee in northern Indiana.

While other youngsters dreamed of becoming a firefighter, police officer or even an astronaut, Flaherty imagined a career in real estate.

Even Flaherty finds it hard to explain.

“My mom sold homes later in life,” he recalled, “but I was interested before that.”

Where that interest stems from, it’s hard to say. It’s not like he grew up in a big city surrounded by construction projects to match.

To the contrary, he moved to Nappanee with his family from Omaha, Neb., in 1970. His father, a Moen faucet salesman, was transferred to the area to tap into the recreational vehicle market that’s so abundant in northern Indiana.

So it’s no wonder that Flaherty even worked in the factories for a few summers as a college student, mostly at Holiday Rambler, now a division of Monaco Coach Corp.

Once on their own, Flaherty and Collins began building the property management side of the business first, but not at an apartment complex. They landed a deal at an office building in College Park on the northwest side of Indianapolis. 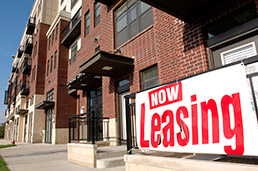 The Cosmopolitan, rebuilt following a fire in 2009, helped launch Flaherty & Collins as a major player in the world of mixed-use development. The company’s Axis at Block 400 project will open in the summer nearly across the street. (IBJ file photo)

The development of “garden-style” apartment projects—typically small and low-rise—ultimately followed, with Greenfield Crossing, a 270-unit complex in Greenfield that they had a minority stake in, followed by the 192-unit Runaway Bay in Speedway that they developed themselves in the late 1990s.

The pair entered the mixed-use market with the Cosmopolitan in 2007 after Flaherty saw similar projects being built in Texas.

“Today, we don’t even do garden-style anymore,” he said. “[Mixed use is] a much more complicated development, but in the end, we think they’re a much more secure development.”

That’s not to say Flaherty & Collins hasn’t run into problems with a few of its projects.

In the mid-2000s, before the housing bust, condominiums were still hot. Flaherty & Collins jumped into the action with its most audacious project—a 53-story condo tower in Charlotte, N.C., with a price tag topping $200 million.

The project—dubbed 210 Trade—would have been the tallest residential building in the Carolinas, with more floors than any building in the region except the Charlotte headquarters of Bank of America Corp.

But in October 2009, Flaherty & Collins’ Charlotte FC LLC filed for Chapter 7 bankruptcy liquidation in Indianapolis, listing liabilities of $53 million and assets of just $197,492.

Flaherty & Collins pulled out of the project after the condo market went south, leaving just the retail space and a parking garage.

In Chicago, Flaherty & Collins built just 50 of 150 planned condos before demand collapsed, causing the firm to pull out.

“Both of those were big failures,” Flaherty conceded.

They’re a humbling comeuppance for a company that otherwise has a sterling record.

The firm has completed roughly 30 developments, when counting second phases to existing projects.

Downtown, it’s partnering with Insight Development Corp., the development arm of the Indianapolis Housing Agency, on the Millikan on Mass project. The $23 million project is being built in two phases across from the Athenaeum on ground surrounding Barton Tower Apartments.

In Noblesville, construction is under way on the $42 million, 242-unit Depot at Nickel Plate, which also includes 15,000 square feet of retail space and a 430-space parking garage.

Projects outside of Indianapolis that have been completed recently are in Cincinnati, suburban Chicago and Minneapolis.

Overall, the company has developments in seven states and 400 employees, and is based at Keystone at the Crossing. Its strategy is to continue to focus on multifamily, mixed-use projects in the Midwest by partnering with city governments for financing. Flaherty & Collins also wants to expand its affordable-housing portfolio, which is mostly concentrated in Indiana, into other states.

“We’re not running into people who have a bigger resume than us in the Midwest,” Flaherty said.•