A year-long court feud over a retail building at the southwest corner of 49th Street and College Avenue is nearing an end, as a bankruptcy judge has denied the owner’s bid to reorganize and delay foreclosure.

The dispute started in October 2012 when the lender, locally based Alpha Capital LLC, tried to take possession of the Uptown Business Center. It is owned by Leif Hinterberger and his partners, who owe roughly $843,300 under the default mortgage, according to Alpha’s suit filed in Marion Superior Court. 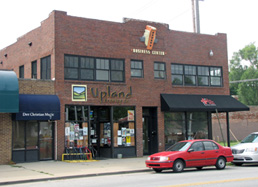 The fight spilled into federal court in July when Hinterberger filed to reorganize the assets of Uptown Business Center LLC under the protection of Chapter 11 bankruptcy.

“There is no evidence that the debtor can obtain alternative financing or infusion of capital in the immediate future,” Moberly wrote. “It was mismanagement of the debtor that prompted [his] financial woes with Alpha.”

Alpha Capital’s attorney, John Waller of Wooden & McLaughlin LLP, declined to comment on the judge’s ruling. He said the building is set for sheriff’s sale Jan. 15.

To repay Alpha Capital, Hinterberger proposed suing 60 Minute Cleaners, located to the immediate south of his property, for environmental damages caused by the potential discharge of dry-cleaning solvent, the court document said.

“This potential claim is so speculative and remote that it cannot be considered by the court in determining whether there is a likelihood of a successful reorganization of this debtor,” she wrote.

Hinterberger lists owner assets of nearly $1.4 million, or the assessed value of the building whose tenants include the Upland Brewery tasting room and The Paw Patch Veterinary Hospital.

Liabilities on the building total about $1.1 million, the bulk of which is the mortgage owed to Alpha. The bankruptcy filing also names Arturo DeRosa, Donald C. Arbogast Jr., Dan Fortune and Steve LaCross, who hold second mortgages on the property.

In an email, Hinterberger said he and his partners are exploring all available remedies to correct what they believe to be “serious improprieties” by multiple parties that have undermined the viability of the Uptown Business Center and another nearby project.

Hinterberger in 2011 lost control of six properties across the street from the Uptown Business Center on the northwest corner of the intersection of 49th and College, where he had hoped to build a $19 million mixed-use project called The Uptown.

Those properties are now controlled by locally based Strategic Mortgage Funding, a company operated by Bryan Chandler, who is also a principal of Alpha Capital, which invests in distressed mortgages.

Despite its troubles, the Uptown Business Center should attract interest from potential buyers, said Scott Lindenberg of Reliant Partners Commercial Realty, who has listings in the Broad Ripple area.

“From 49th up to Broad Ripple [Avenue], I definitely think the College corridor and SoBro have some good vibrancy,” he said, “and it’s a good site.”

Smith Equity Partners has been appointed as receiver to manage the property.