The array of artwork assembled by the new Eskenazi Health hospital is impressive enough to make some museums envious.

In fact, one of the pieces did come from a museum—the Indiana State Museum.

The $754 million facility on the west end of the IUPUI campus is set to open Dec. 7 and will replace the aging Wishard Hospital about a block away. 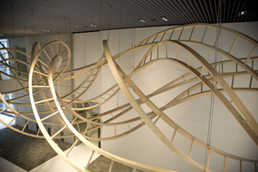 A spiraling wooden sculpture made from Indiana maple hangs from the ceiling of the main concourse of the new hospital. (Image courtesy Eskenazi Health)

At 1.3 million square feet, the new hospital has plenty of room to display the art, most of which was purchased with contributions from donors.

One piece that wasn’t, but perhaps is the most valuable of the hospital’s collection, is a T.C. Steele painting on loan for 99 years from the state museum.

The winter landscape completes a set of four seasonal oil paintings by the Hoosier artist who died in 1926 at the age of 78. Known for his Indiana landscapes, Steele painted the large pieces in 1904 for what was then known as City Hospital. 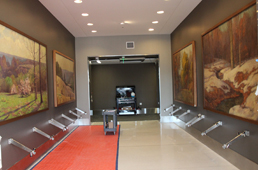 The Steele paintings were removed from the walls of the hospital in the 1960s to be restored. One painting from the four seasons, “Winter," was given to the museum in 1976 as a gift for temporarily storing several paintings in the museum.

The other three were hung in conference rooms in Wishard, a name selected in 1974 to honor Dr. William N. Wishard, a leading physician in Indianapolis.

Hospital administrators named the new facility to honor commercial real estate developer Sidney Eskenazi and his wife, Lois, whose $40 million gift was among tens of millions of dollars raised to help fund construction.

The artwork, combined with a building design that favors natural sunlight, should provide a calming feel for both patients and visitors, said Matt Gutwein, CEO of the Health and Hospital Corporation of Marion County, which owns the hospital.

“The thought was, let’s make this a place that’s comforting for patients and not complicated,” he said, “and let’s have art where you don’t normally have art.”

Indeed, one of the most awe-inspiring pieces is suspended from the ceiling in the main concourse. The large, spiraling wooden sculpture made from Indiana maple is titled “Paths Crossed” and was done by Maine artist Aaron Stephan.

Barnes & Thornburg LLP funded Stephan’s work. Executive Director Kenneth Kobe declined to divulge how much the law firm gave but said it has a long history of supporting the arts.

“We’re really pleased to have our name on it,” Kobe said. “The public space is so open; it’s just really inviting.”

Visitors arriving from the parking garage are greeted in a corridor by “Synchronicity of Color,” rectangular panels painted by University of Texas art professor Margo Sawyer. To tie in with the city’s rich racing history, she used racecar paint on the panels that shift in color when looking at them from different angles.

The elevator bank of the six-story outpatient wing features an impressive LED display on the rear wall that extends up the entire tower and can be seen on each floor. Programmed by Ball State University graduates, the lights behind the white wall light up when there’s movement in the bay, following the motion of a visitor.

A “sky farm” on the roof of the outpatient wing enables patients to help grow fruits and vegetables that will be served in hospital meals. Five whirlygigs designed by Eric Fulford, a local landscape architect who died last year of a brain tumor, sit atop the roof.

“It lets patients get out of their beds and breathe some fresh air,” Gutwein said of the farm.

Nearly 100 photographs shot by Indianapolis Public Schools students are on display in a pediatric outpatient area. Stacked three deep, the wall of photos provides a whimsical look at life in the city and was part of a project led by photographer Richard Ross.

Visitors to the 12-story inpatient tower are treated to a large photograph on each level of a different tree indigenous to Indiana.

The new hospital is a third smaller than the old Wishard, a combination of 17 buildings, but can accommodate more patients because of its efficient design, Gutwein said. St. Louis-based HOK was the lead architect on the project, with help from about 30 other firms, including locals such as BSA LifeStructures, Ratio Architects Inc., A2SO4 and Blackburn Architects Inc.

Eskenazi Health is seeking a “silver” designation from the Leadership in Energy and Environmental Design, or LEED, from the U.S. Green Building Council for its green features.

Though the design is impressive, Gutwein said, the amount of artwork is what sets the hospital apart from others.

“In other words,” he said, “we want to do more than just heal people here.”