It could have easily just been a fountain. And a plaque or two. Plus maybe a nice patch of green.

After all, patients passing through the new Eskenazi Health campus—many of them the poorest of the region’s poor—have a lot on their minds other than ground-breaking design. 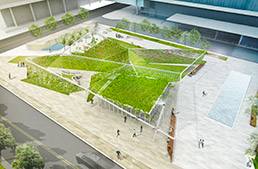 But Matthew R. Gutwein, president and CEO of Health & Hospital Corporation of Marion County, had greater ambitions for The Commonground, the welcoming park at the main entrance to his new facility. And those ambitions had less to do with design ideas—he is, after all, a hospital administrator, not an architect—and more to do with a view of the role his hospital plays in the community.

“On any given day, in the entire state of Indiana, the piece of real estate that has the greatest degree of diversity is Eskenazi Health,” Gutwein said. “Last year, we treated patients that spoke 170 different languages and came from 130 countries of origin. They represent every possible age demographic, every disability, and every socioeconomic group. So we thought, ‘How do we celebrate and leverage that? How do we create opportunities for greater social connections among this amazing collection of people?’”

Little did he realize, though, that his ambitions for the space would eventually pull in not only one of the top landscape architects in the country, but also one of the hottest architecture firms in the world—a firm that includes the first architects to land the MacArthur “Genius” Prize. The result is a $2.9 million project underwritten by private donations.

Gutwein found a kindred spirit when he cold-called David Rubin, then a partner in the Philadelphia-based Olin Studios, whose projects included the transformation of New York’s Bryant Park from a needle den into a popular public space. The firm also worked on Olympic Village in Barcelona, Spain, and Philadelphia’s Independence Park.

“When Matt described his aspiration for the hospital, he matched my philosophy of landscape,” recalled Rubin, who, during the course of the project, formed his own company, Land Collective. “It’s empathy-driven design.”

Rubin’s concept included segmenting the area into regions, including spaces for public events as well as room for contemplation and small-group congregating.

Among the notable details is a surface-level, barrier-free pool called Healing Waters, inspired by biblical Bethesda as recounted in the Gospel of John. Designed to allow for splashing or cruising through on a wheelchair, it includes text by poet Mitchell Douglas, although a few key words, “the obscure is revealed,” don’t become readable until the pool drains, which it does cyclically.

“I didn’t want it to have a religious connotation,” Rubin said. “I was looking for a secular statement that could have meaning to everyone … in multiple ways and also at different times.”

Not a fan of trendy design, Rubin wants a space that will be as meaningful to his grandnieces and grandnephews as it is to people today. 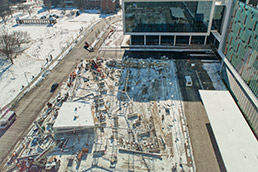 The park—including a barrier-free pool, café and trellis-like, plant-covered structure—is taking shape at the hospital’s entrance. The hospital didn’t set out to recruit an all-star design team, but it wound up with one. (IBJ photo/Eric Learned)

In addition to knowing that the space needed varied seating options, a series of waterfalls around Indiana limestone, and space for public performances/yoga classes/lectures or whatever else Gutwein’s team comes up with, Rubin also envisioned a restaurant space and a trellis, of sorts, to help give the park dimension, texture, division and, in parts, a roof—elements beyond his purview as a landscape architect.

That’s where a dining invitation paid off. 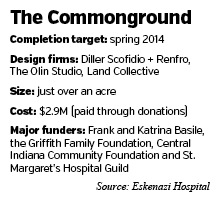 Max Anderson, then head of the Indianapolis Museum of Art, was hosting a dinner for guest lecturer Elizabeth Diller, a partner in the design firm Diller Scofidio + Renfro and co-winner of a MacArthur Foundation prize. She and her firm had redeveloped the Lincoln Center for the Performing Arts in New York, orchestrated the first Boston museum to be built in a century, and crafted a structure for the Swiss Expo with clouds for walls (Googling “Blur Building” is well worth your time).

Most famously, her firm turned about a mile and a half of elevated railroad line into the High Line, an urban trail now a celebrated New York landmark that has dramatically affected Manhattan real estate.

“Through sheer dumb luck, I happened to be sitting next to her,” said Gutwein, who didn’t have project selling on his mind. But Anderson prodded Gutwein to tell her about the Eskenazi project. Diller seemed genuinely interested and, the next day, with Anderson’s blessing (and a personal email address he supplied), Gutwein sent a three-page, single-spaced note to her. He said it boiled down to, “All of us can benefit from the joy of great architecture. But if anybody truly needs the joy of great architecture, it’s the sick who are poor.”

Shortly after pushing “send,” a reply came back.

“Before I knew it,” recalled Gutwein, “I was in New York sitting down with the firm and we were off to the races.”

DS+R takes a unique view of its projects. All three principals contribute ideas and all have to sign off on the results. As such, the question of intellectual ownership is blurred.

No matter whose brainchild, though, the result is that a trellis-like creation will divide a portion of the park into four zones, some covered overhead with plants, some with vegetation-covered walls. As the plants grow, the space is designed to transform, deliberately obscuring the difference between landscape and building façade. 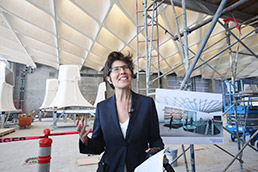 Underneath one area will be a café, run by Duos, known locally for its health-focused restaurant, food truck and catering business. (Fitting in with Gutwein’s push for healthier foods in his hospital, where you won’t find sugar soda or anything deep-fried.)

“We’ve never done anything for a hospital before … or anything in Indianapolis,” said DS+R associate Anthony Saby, project manager for the trellis and café. He acknowledged that coming in late to the project led to some challenges.

“We haven’t normally been a rider on a larger project,” Saby said. “These people have strong voices and I’d be lying if I said there weren’t some struggles. But everyone worked in the best interest of the project.”

The restaurant cafe was planned in such a way that “when you’re in, you’re always looking out. We wanted a panoramic space—a restaurant that has no back.”

The firm was also always cognizant of how the space would look from above. Key elements in the hospital building design are a rooftop garden and lots of natural light through windows overlooking The Commonground.

“Ideally, you want something visually interesting when you look down,” Saby said. “And that’s not strictly daytime. There’s a nighttime component that will change and morph—not to be overly frenetic but creating hues and colors. A goal is to afford people the opportunity to look back over where they’ve been.”

The convention-defying trellis—which includes areas that span up to 70 feet without column support—could have led to regulation complications, but Saby has nothing but praise for the city. “I’ve never had this level of genuine interest [on the part of code officials]. It was a good surprise.”•