Home » Owners of Regions Tower putting building on the market

The owners of the 36-story Regions Tower are putting the building on the market after completing a lengthy renovation of its exterior last year.

The same group has owned the building, also known as One Indiana Square, since 2001. As the financing environment for real estate transactions has improved, it decided the time was right to explore a sale. 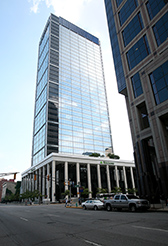 “We’re just compelled to put it on the market and test its value,” said Todd Maurer, a part owner of the building and principal at Newmark Knight Frank Halakar, which manages the property.

Todd Maurer said he would not disclose the asking price before the property officially hits the market early next year. Real estate brokers say the 662,000-square-foot building could fetch more than $60 million, or about $100 a square foot.

“It looks as sharp as any downtown tower,” said Darrin Boyd, an office broker at Cassidy Turley. “You would never know it was built in 1969. It’s got a lot of things going for it.”

The ownership group, One Indiana Square Associates LLC, bought the building at the northeast corner of Pennsylvania and Ohio streets for about $25 million in October 2001.

The building had suffered from a tenant exodus and was only 30-percent occupied. It’s now close to 70-percent full, Todd Maurer said.

The ownership group has added six tenants in the past year following completion of the new façade.

The group launched the exterior renovation in 2007, a year after a storm blew out dozens of windows. No one was injured, but the storm displaced more than 1,000 employees working in the building.

“It was a six-year handicap,” he said. “People weren’t going to lease until they saw that the work was done.”

A smaller, longtime tenant, Woodley Farra Manion Portfolio Management Inc. recently vacated about 2,800 square feet on the 22nd floor. The investment firm said in a Dec. 16 release that after 18 years in the building, it moved to Keystone at the Crossing to be closer to many of its clients.

Regions’ occupancy is lower than downtown’s overall rate for office space, which has hovered around 80 percent for most of the year.

“Certainly, the additions they’ve made to the building make the building attractive,” said Bill Ehret, president of Summit Realty Group, which took over leasing last month for BMO Plaza, on the southeast corner of Pennsylvania and Ohio streets. “The biggest problem in general is just making sure we have enough companies and employees to fill up the [available] office space.”

An improved financing environment has helped prompt owners of other downtown towers to put properties on the market in recent years.

In April, Santa Monica, Calif.-based Hertz Investment Group completed its purchase of the nearly 650,000-square-foot Capital Center. Hertz bought the  two-tower complex on North Illinois Street and the 525-space underground parking garage from an Invesco-managed German fund that had owned the property for about 12 years. Terms of the purchase were not disclosed.

In 2012, Massachusetts-based CommonWealth REIT agreed to pay $201 million—about $190 per square foot—for the 48-story Chase Tower and an adjacent building on Monument Circle.

“We see ourselves as stewards of this property,” Todd Maurer said. “It’s not an easy decision [to sell]. There’s a lot of reluctance to do it.”

Maurer’s Halakar Properties and the Chicago office of Jones Lang LaSalle will list the building.