The IndyCar Series has filed a lawsuit against Radio e Televisao Bandeirantes Ltda., the promoter of an IndyCar race in Sao Paulo, Brazil, seeking to recover a seven-figure sanctioning fee that was due this summer.

The case was transferred Dec. 12 from Marion Superior Court to a federal court in Indianapolis.

Despite troubles with the promoter, IndyCar officials haven’t given up on returning the series to Brazil.

The race also is important because some of the series’ most popular drivers—including 2013 Indianapolis 500 champion Tony Kanaan and Helio Castroneves—are Brazilian, and “Brazil is a strong motorsports market and the series has several sponsors there,” said Zak Brown, president of Just Marketing International, a Zionsville-based motorsports marketing firm.

In 2009, IndyCar officials signed a deal with Radio e Televisao Bandeirantes to hold the race in Sao Paulo through 2014. That deal, the lawsuit says, was later extended through 2019.

While the race seemed to be a significant moneymaker for IndyCar, motorsports analyst Derek Daly doubts the race was making much money for the promoter.

“If this race was financially viable, in any way financially successful for the promoter, you wouldn’t have this lawsuit and it would still be going on,” Daly said.

“You don’t just shut down a successful event due to some venue problems,” Daly said.

When Hulman & Co. CEO Mark Miles unveiled IndyCar’s 2014 schedule in October, he said the street race in Sao Paulo might still return, but is not part of the schedule now. IndyCar officials this month told IBJ that Miles is still holding out hope the event can be held in 2015 if not in 2014.

In 2013, the Sao Paulo race was held the first weekend in May. That date isn’t possible this year since the series is holding its inaugural IndyCar road race at the Indianapolis Motor Speedway May 10. 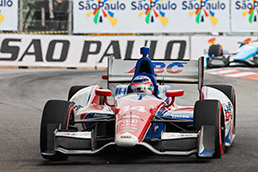 The street race in Sao Paulo, Brazil, is one of the most profitable for the IndyCar Series, nettting about
$2 million a year. (AP photo)

The Brazilian promoter’s contractual duties included organizing and promoting events related to the race and securing the track where the race would be run. As part of the agreement, the promoter got the rights to “commercially exploit various aspects of the Brazilian race,” according to the lawsuit.

In exchange for that, the lawsuit claims, the promoter agreed to pay a series of sanctioning fees.

The lawsuit claims that, in early July 2013, the Brazilian race promoters were informed by Sao Paulo Mayor Fernando Haddad that part of the course run on city streets would be unavailable due to road construction. Haddad, the lawsuit claims, wrote in a letter that the race could still be held, but the course would need to be altered and/or relocated.

Radio e Televisao Bandeirantes officials instead, the lawsuit claims, traveled to Indianapolis and informed IndyCar officials that the race could not be held in 2014. Miles claims in the lawsuit that he reminded the promoters via a letter dated July 31 of their contractual obligations.

Meanwhile, IndyCar officials claim in the lawsuit that two sanctioning-fee payments due Aug. 17 and Sept. 17 were never paid.

Though IndyCar in its lawsuit is asking for a jury trial, officials would likely prefer a settlement that allows for the race to continue.•