First, let’s give The Tamale Place (City Market, 423-2203) points for its name—which reflects exactly how, I believe, most people view the eatery booths at City Market.

Formal monikers? Nah. Most places at the market can be boiled down to their essence. The pizza place. The soft pretzel place. The juice place, etc. And now we have the easy-to-remember Tamale Place.

Let’s also give points for the electronic sign over the cash register that tells patrons how many of each kind of tamale are left. This helps add a sense of drama to the ordering process, especially when there are a few folks in front of you and you really, really, really want that last Chipotle Chicken Tamale. 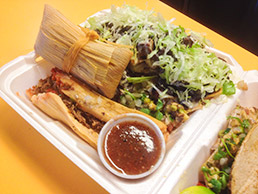 Have a favorite tamale? At The Tamale Place, check the board to find out what’s left. (IBJ Photo/ Mason King)

And then there’s the food, which on our visits ranged from OK to outstanding.

The Tamale Place focuses on bigger-than-standard tamales with a range of fillings, all at $3.49 each. These come directly from the Tamale Place’s Rockville Road kitchen (You might have seen Guy Fieri visit there during season 12 of “Diners, Drive-Ins and Dives”). There, bags of white corn are boiled with a bit of lime. After cooling, the corn is ground and formed into tortillas and chips (the business began as Tortilleria Angelita, which focused on homemade tortillas). The ground corn dough, or masa, is also the key ingredient in tamales. For tamales, masa and other ingredients are packed into corn husks, tied, steamed, and served in their own you-open packages.

On one visit to the newly opened City Market spot, a colleague found the Chipotle Chicken Tamale to be as spicy as advertised but strictly one-dimensional in overall taste. The Beef in Red Sauce tamale was generously filled with meat, cushioned and accented by the masa. Subtle and flavorful, yes, but a bit more of the promised red sauce (or any trace of it) would have been helpful. No such complaints for the Chicken in Green Sauce, where chilies integrated nicely with the ample chicken and comforting masa.

Don’t look for crunch or doughiness in the Tacos ($2.99). One colleague enjoyed the veggie’s substantial soft tortilla and pleasantly spicy innards. I’d return for the sloppy and satisfying Spicy Chipotle Chicken any day. Make sure to include cilantro and onion for maximum effect. (In theory, onion, cilantro and other toppings have a 25-cent upcharge attached, but ours seemed to have been forgotten about.)

When I ordered Steak Nachos ($7.49), I was asked if I wanted a full or half order. Despite my answer of half, I was given—and charged for—a full pile, which offered more than enough for sharing.

If there’s room, give in to the temptation of the Apple w/Pecan dessert tamale ($1.99) which, when unwrapped, revealed a dense mix of what would make a terrific apple pie subbing soft masa for crumbly crust.•