Gusts blowing across Interstate 65 north of Lafayette one recent day were powerful enough to shake cars but impotent to budge the blades of the giant wind turbines dotting the sparse landscape.

On an ideal day for generating electricity, the colossal pinwheels were eerily still, and for the most unlikely of reasons. They’d been turned off.

Why? Neither the wind farm operators nor the utilities contracted to buy their electricity had built enough power lines to carry the surge to Midwestern homes and businesses. 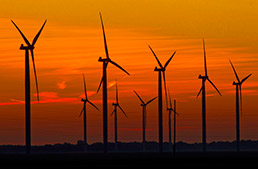 What little electricity the wind farms produce wends its way out of the thinly populated area through a modest network of lines designed before the operations popped up in 2008.

The missed revenue is a drop in the bucket for power companies, which balance overwhelmingly coal-fired energy portfolios worth tens of billions of dollars a year.

And Midwest Independent System Operator, the Carmel-based not-for-profit that directs electricity throughout much of the upper Midwest and Mississippi Delta, has streamlined its handling of the wind-generated current.

But the wind farms continue to shut down for hours at a time, causing the state to miss out on a harvest of green energy.

Had the farms operated at average capacity in the past five years, they would have churned out enough electricity to power an additional 100,000 homes, equivalent to all the households in Hamilton County, IBJ found in an analysis of federal data.

“What it comes down to is, it’s lost revenue; it’s electricity that could be generated and it isn’t,” said Paul Preckel, faculty director of the State Utility Forecasting Group at Purdue University.

Indiana was late to the boom in wind energy, but once construction started in 2008, four wind farms boasting 798 towers and capacity of 1,338 megawatts sprouted within months in Benton and White counties.

The boom was fueled by a confluence of a national push for clean energy with no fuel costs and the high wind speeds in some open areas of northern Indiana.

Utilities, coping with rising coal and natural gas prices in the 2000s, turned to wind as a hedge against volatile fuel pricing and looming regulations on carbon emissions.

Winds in most of Indiana don’t hold a candle to the howling speeds in the high plains between North Dakota and Texas, where many turbines are located, but a spot northwest of Lafayette spanning Benton, White, Newton and Jasper counties is almost as breezy, according to the Energy Information Agency. Winds in the pocket average 8 mph—among the fastest east of the Mississippi River, and nearly twice as fast as some areas of southern Indiana.

Canadian winds are pushed into Benton and White counties by the Great Lakes, said Ken Scheeringa, associate state climatologist for the Indiana State Climate Office at Purdue University. The counties also have few buildings to slow the winds.

Wind farms also have emerged in Tipton and Madison counties north of Indianapolis.

In all, the state’s wind energy capacity has mushroomed tenfold since 2008.

‘Not at all average’

Energy farms are notoriously inefficient, with turbines typically producing about 35 percent of their capacity due to varying wind speeds and unperfected technology.

But Indiana’s farms are even more inefficient. Between January and November last year, they operated at only about 25 percent of their potential, according to the latest figures available from the U.S. Energy Information Administration.

Peak efficiency for a full year—28 percent—was reached in 2011.

Considering that electricity sells in wholesale markets at $35 to $40 per megawatt hour, utilities and wind farm operators have missed out on tens of millions of dollars in revenue.

The amount of wind energy Indiana generates is well below the performance throughout all of MISO’s grid, noted Bob Fagan, principal associate at consultant Synapse Energy Economics Inc. in Cambridge, Mass.

The rapid advent of Indiana’s wind farms and the bungling of the transmission lines quickly created congestion.

Most of the time, the turbines generated electricity faster than the lines could accept it. But in periods of low usage, such as spring and fall, the turbines churned out more power than there was demand.

In those periods, utilities were obligated to pay the wind farms regardless of the demand, so the utilities subsidized the farms rather than eat the greater expense of shutting down and restarting their coal- and gas-fired plants.

Critics charge the congestion was worsened by a federal tax credit started in 1992 to stimulate renewable power by offsetting some development costs. Wind-energy producers could collect a hefty $23 for every megawatt hour they produced.

The critics slam the incentive for encouraging wind-energy producers to put out more electricity than the grid can handle just so the companies could claim the tax credits.

Indiana took in $69.6 million in credits in 2012 while paying out $57.9 million in taxes to support the incentive, according to a December report by the Institute for Energy Research, a Washington, D.C., think tank with ties to the oil industry.

“One of the biggest problems with the [Production Tax Credit] is that it provides incentives for wind producers to sell electricity to the grid at ‘negative prices.’ In other words, the PTC subsidy is so excessive that wind producers frequently pay the grid to take their electricity,” said a September statement by the group.

The think tank and the American Wind Energy Association industry group argue over the accuracy of each other’s claims.

Regardless of their stand, Congress let the incentives expire at the end of 2013. The credits, however, are good for 10 years, so any wind development before the end of last year will continue to receive the breaks.

Before 2009, wind amounted to such a small resource that MISO didn’t even use computers to regulate generation, as it does to manage coal- and gas-fired plants.

When MISO noticed congestion in the grid, it would put in a telephone call to the utilities, which in turn called the farm operators to dial back operations. The process took hours; meanwhile, the wind farms produced electricity but had nowhere to send it, at least not without sending it at a high cost.

“[Turbines] just sat there, and when the wind blew, they generated power, and it just goes into the lines,” said Dennis Dininger, director of fuel supply for Indianapolis Power & Light Co. “[MISO] could see what the wind parks were doing, but they had no control over it.”

Problems stemming from grid congestion around the wind farms worked their way into rate cases handled by state regulators.

Duke Energy, in a routine rate-adjustment filing in October, said it paid to distribute the electricity it bought from Benton County Wind Farm, according to Indiana Utility Regulatory Commission documents. Duke’s contract with the farm dictates that it buy all electricity the farm produces.

The utility did not specify its costs for the wind farm. But the operation was a factor—albeit a small one—in a request to increase residential rates by an average of $1.53 for November and December.

Duke officials noted in their filing that MISO changed its system in early 2013 to better manage wind energy, resulting in significantly fewer curtailments.

Instead of dumping the energy onto the grid with little control, MISO incorporated wind into the same computer system used for traditional fuels. MISO can now constantly monitor wind production and adjust as need dictates every five minutes.

Slowdowns still happen frequently. But they are much more cost-effective for the parties compared to the “manual curtailments” that constantly hurt wind farms.

The system has become “more efficient, from a market perspective, and an operations perspective,” MISO officials wrote in an email to IBJ.

However, MISO’s new system for wind energy is at the core of a federal lawsuit Benton County Wind Farm filed against Duke in December.

The litigation sheds light on how dire the situation became in the area. The farm’s owners accused Duke of breaching its purchase contract, “proving disastrous” to the operation.

Once MISO changed its system in early 2013, Duke had to submit bids to sell the energy it bought from the farm—rather than automatically placing the electricity onto the grid, as it previously did. If bids are too high, MISO’s computer system curtails wind farms’ production.

Documents redact a lot of the details behind what the wind farm accuses Duke of doing. But the suit says the utility “curtail[ed] electrical production by refusing to offer the Wind Farm’s power to MISO at competitive prices” and would not compensate the farm for the missed revenue.

Better, but not fixed

MISO admits that even in the best circumstances, its revamped process for handling wind energy “does nothing to eliminate the underlying drivers for congestion.” The change, MISO said, merely gives its operators “tools to more effectively and efficiently manage the congestion when it occurs.”

It will take an estimated $5.2 billion in investments throughout MISO’s network, including $800 million in Indiana, over several years to accommodate wind energy well enough to meet state-by-state mandates for renewable energy.

MISO in a January 2012 report outlined 17 transmission projects it says will alleviate congestion and help states meet renewable energy mandates, among other benefits.

A separate report in May 2012 by Synapse, the Massachusetts consultant, determined investments in Midwest’s electrical infrastructure to bring on more wind energy would ultimately lower utility rates for customers, especially as the upfront costs for wind decrease while fuel costs for coal and gas increase.

“The economics keep getting better” for wind, said Synapse’s Fagan.

But infrastructure upgrades need to happen to tap the renewable resource’s full potential.

“Until they get the transmission assets in place,” Fagan said, “they’ll continue to need to curtail wind.”•