Technically, can you be between one thing? Not according to spell check, which insisted that I change “thing” to “things” in the previous sentence. But I’m guessing grammarians aren’t the primary audience for Between the Bun (102 S. Madison Ave., Greenwood, 300-8327), a scrappy local burger joint with big aspirations. 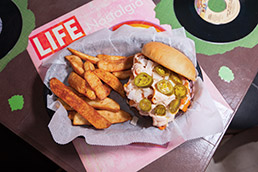 Between the Bun isn’t shy about using peppers on nearly everything. (IBJ photo/Eric Learned)

Its goal: “To create the finest burger this world has ever tasted, end of story.”

And while we didn’t find that, we did find an easygoing place where the tables are layered with 1950s-era Life magazine covers, overhead speakers played Dexys Midnight Runners (quite possibly the most 1980s thing to come out of the 1980s), the house salad includes both bacon and pepperoni, the T-shirts are available in 2XL, and the kitchen has no fear of hot sauce. Its subhead is “burgers, dogs and more” so we opted to try a burger, a dog, and more.

Let’s start with the “more.” Or, to be more accurate, the “lots more.” Specifically, the Mixed Bag ($9.79), an appetizer sampler that includes fried pickles, bacon cheese fries, and Great Balls of Fire. The first two are familiar bar food staples given solid treatment here. The last one consists of deep fried pepper jack cheese balls sprinkled with seasoning and dippable in Horsey Ranch sauce. While they were hot, there was no need to call an EMT.

For the dog, we took a chance on the Dog Pound ($7.29). Here, a deep-fried dog—think outer-skin crunch rather than corn dog shell—was adorned with applewood smoked bacon, cheddar jack cheese, onion, relish and barbecue sauce. Sloppy? Of course. But State Fair good.

The burger was much like the ambience, melding a little of everything. The menu called it the PB&J Burger ($9.29), despite a lack of J. Instead, maple syrup sweetened the beef and peanut butter combo. The kitchen threw on some bacon and jalapenos, because why not? I wonder what caused someone to think it was a good idea to mix grilled ground beef, peanut butter, bacon, jalapenos and maple syrup, but I’m glad someone experimented.

Also on the menu: quesadillas, chicken dishes, and the playfully named Notorious PIG hickory-smoked pulled pork sandwich. Each sandwich comes with a choice of fries, tater tots, house mac and cheese, or cottage cheese. Our tots weren’t significantly different from what we’d empty from a box into a toaster oven on a desperate night. The Mac, like the burger, combined the usual with a wild-card ingredient. This time, it was a drizzle of barbecue sauce. Definitely an interesting changeup from the mac and cheese norm—just as Between the Bun is an interesting changeup from the burger place norm.•