Autism is big business in Indiana. 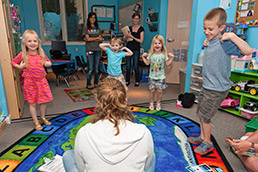 Therapists work with kids with autism at the Behavior Analysis Center for Autism in Fishers. (IBJ photo/Eric Learned)

Since 2001, when Indiana became the first state to require health insurers to cover autism therapy in a meaningful way, a cottage industry of therapists and other service providers has sprung up.

Indiana boasts one of the highest concentrations of autism-focused therapists and even sports a new magazine, Autism Companion, supported by advertisers and subscribers in Indiana.

“I didn’t even go out and do any market research at all because the demand was so great,” said Jane Grimes, who, before starting the magazine in 2013, was enrollment director at the Applied Behavior Center for Autism, which is expanding to six locations around the state.

One Indianapolis therapy provider, The Hope Source, nearly closed its doors in March because it couldn’t make payroll, although its finances have since rebounded a bit. Most other therapists have cut staff or services.

“We’re just scrambling around—all the centers,” said Carl Sundberg, executive director of the Behavior Analysis Center for Autism, which operates locations in Fishers, Zionsville and Elkhart. After Anthem’s cuts to reimbursement and hours, his center let go of 15 people, nearly 10 percent of its staff.

“If they were to cut again, we’re all done. The whole system’s done,” Sundberg said. “If the rates were cut again, we would have to provide a service that I wouldn’t want to have my name on.”

For most autism therapists, the Anthem changes began two years ago, when the Indianapolis-based insurer said children age 7 and older need to receive a chunk of their autism therapy from public schools, as state and federal laws for disabled Americans requires.

“Anthem cannot duplicate coverage for services that are available through the public school system,” Anthem stated in a May 2012 letter to parents of autistic children. The letter reiterated Anthem’s commitment to provide coverage for autism therapy. It has physicians review therapists’ treatment plan for each patient and, while it might deny some of the proposed terms, rarely issues a complete denial of coverage.

That meant Anthem would pay for fewer hours of therapy—many providers say 20 hours per week, instead of 40. Therapists say such a policy is fine for children who are ready or nearly ready to do school work with peers of the same age. 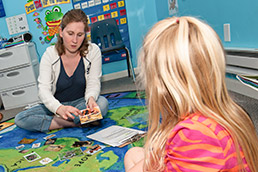 However, for children more severely affected, public schools are ill-suited and ill-funded to be the major source of therapy, noted Jim Monroe, whose son Evan, 7, has autism.

“That would be a disaster. Because the townships don’t have the resources,” said Monroe, an accountant in Indianapolis who also runs a side business helping families with autism plan vacations to Disney theme parks.

Anthem’s policy change, which Monroe unsuccessfully appealed, caused him to switch his health insurance coverage to UnitedHealthcare to continue to get coverage for his son’s therapy.

“Without the insurance mandate, it’s basically just impossible to get therapy for your child,” Monroe said.

The state provides public schools an extra $8,350 for each student with autism. That’s consistent with national averages, according to a study led by Harvard University researchers that was published in the journal Pediatrics in March.

However, the cost of full-time private therapy is estimated at $50,000 to $60,000 annually, according to a review of studies by the Indiana Health Law Review.

The cut to hours hit The Hope Source particularly hard because 85 percent of its clients are age 9 and over. And founder Julie Brant Gordon said she was determined not to send those school-age kids away.

To help a bit, Gordon signed a partnership with the Indiana Cyber Charter School, so she can enroll all her full-time, school-age clients in that school and, thereby, receive the extra state funding for their “at school” care. But since the school operates virtually, her clients continue to do their therapy at The Hope Source center, as they always have.

But that arrangement still is not enough to make up for the cuts in hours and reimbursement from Anthem. Hope Source dropped its health benefits for employees last year to make ends meet.

“What Anthem needs to understand is that the funding to the schools is so limited, that it’s still not as much as what I’m losing,” Gordon said. “I wish that Anthem wouldn’t have simultaneously cut reimbursement rates and cut hours. And abruptly. Usually, if they’re going to go down, they don’t go down 40 percent—overnight.”

“There was a need to bring those rates more in line with our fee schedule,” Anthem spokesman Tony Felts wrote in an email. “In some cases, we were paying therapists almost twice as much on autism claims as we were paying MDs for an office visit.”

But many therapists contend autism therapy does not fit well with the “medical model,” because face-to-face time with a therapist is only a fraction of the treatment these centers provide.

Sundberg said most of his time is spent working on the reports and plans necessary to provide individualized treatment to each patient. Such specific treatment is necessary in autism because each patient’s collection of symptoms is distinct.

In many ways, the cuts from Anthem are taking the Indiana autism-provider community back to where it was a decade ago. At that time, few patients knew to take advantage of the insurance mandate, so most payment was strictly private.

The autism insurance mandate is one of the most liberal in the country, according to a 2011 assessment by the Indiana Health Law Review. Now, 30 other states also have mandates, according to the National Conference of State Legislatures, with most of those added since 2007.

But even Indiana’s strong mandate is limited. It applies only to what is called full-risk health insurance, which accounts for only 21 percent of the 4.2 million Hoosiers who have private health insurance, according to 2012 figures from Citi Research and the Census Bureau.

The rest are covered by employers who insure their own health benefits—and as a result fall under federal, rather than state, regulations. The Indiana Medicaid program pays for autism services for low-income Hoosiers that qualify for its coverage.

Even so, the autism mandate likely has increased the cost of full-risk health insurance in Indiana about 1 percent, according to a 2007 estimate by the Council for Affordable Health Insurance.

With fully insured health insurance premiums totaling $3.7 billion per year, according to Citi Research, that estimate suggests the bill in Indiana for autism therapy is $37 million each year.

That money goes to treat the one in 77 Hoosier children diagnosed with an autism spectrum disorder, including a high-functioning form known as Asperger’s Syndrome, as well as what are known as pervasive developmental disorders, according to 2013 data from the Indiana Department of Education.

The U.S. Centers for Disease Control estimated in 2012 that one in every 88 U.S. children was on the autism spectrum. This year, however, the CDC released new data claiming that one in 68 American children has autism.

The rates of autism have skyrocketed nationally the past two decades, which some attribute to a rise in trained professionals who can make such a diagnosis but may also be due to other unknown factors.

In Indiana, 197 organizations now provide autism therapy—or three organizations for every 100,000 Hoosiers, according to a database kept by the Autism Society of America.

Among states with at least 100 therapy providers, Indiana ranks seventh for the most per resident.

Grimes, publisher of the Noblesville-based Autism Companion magazine, had an intuitive sense of those numbers because every time she had helped open an autism therapy center, there had been “overwhelming demand.” Grimes, who has a 15-year-old daughter with autism, also used to run an autism parent support group in Hamilton County.

Now she’s experiencing the same thing with her magazine, which is published in association with IBJ Media Custom Publishing, an affiliate of Indianapolis Business Journal.

“We can’t keep them on the shelves fast enough,” Grimes said of the magazine, which is printed quarterly. She said 10,000 copies are distributed at retail stores or mailed to subscribers’ homes, and another 7,000 are printed from the Autism Companion website. The website receives 500,000 unique views each quarter.

Autism Companion’s advertisers have jumped from 10 in the first issue in September to 26 in the most recent issue. They include not only therapists, but also photographers, lawyers, dentists and schools with a focus on special-needs children. Even Monroe, the accountant and vacation planner, has an ad under the organization he works for, HiHo Vacations.

“From the business sector, it’s been surprising, and we are happy about that,” Grimes said, noting that she’ll be able to add paid staff this fall. “It’s come together really, really nicely.”•