The Children’s Museum of Indianapolis plans to begin tearing down a nearby apartment building this month and is starting to explore options for the site that could include an outdoor attraction.

Museum entity TRex Enterprises LLC purchased both The Drake and The Whitestone to the north of the museum in October 2012 from Indianapolis-based Zender Family Limited Partnership for $1 million each.

The vacant Whitestone at 3140 N. Meridian St. will be demolished while the occupied and more architecturally significant Drake, south of the Whitestone, will continue operating as apartments, said Brian Statz, the museum’s vice president of operations and general counsel.

The museum is considering some sort of outdoor attraction or exhibit for the Whitestone lot, sources told IBJ. But Statz said nothing has been finalized. 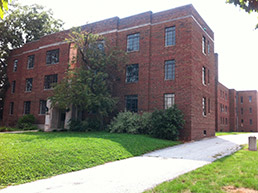 “We intend to make a productive use of the property,” he said, “but the plans for that are not yet definite.”

The Children’s Museum has a policy that calls for funding to be in place before construction on a project can even begin, and there’s no fundraising effort under way, Statz noted. But the museum is on strong financial footing, thanks to a $275 million endowment.

Neighbors such as the Indiana division of the Salvation Army—whose headquarters sit between the Drake and Whitestone—would welcome a museum expansion.

“The Children’s Museum of Indianapolis has been a great neighbor to us for many years,” divisional commander Major John Turner said in an email. “We’re excited about their expansion and what it will mean to this community, and specifically to this area of Meridian Street.”

Museum officials haven’t embarked on an expansion since raising $15.7 million, much of it from a federal grant, in 2008 to add 37,500 square feet of space including a new welcome center, bus driveway and bike port. 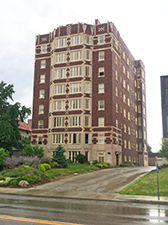 The museum purchased The Drake in 2012, and continues to operate it as an apartment building. (IBJ photo/Scott Olson)

Both the welcome center—and the $25 million Dinosphere exhibit that opened in 2004—were built on the 470,000-square-foot museum’s grounds between Illinois and Meridian streets north of 30th Street.

The Whitestone parcel is halfway up the block and separated by three properties: the Salvation Army headquarters, The Drake apartments and the Schnull-Rauch House—adjacent to the museum and also owned by it.

“That’s certainly a challenge and a factor to be considered,” Statz said of the distance. “But we do want to make it into a positive use for the neighborhood and everybody around.”

All told, minus the Salvation Army building, the museum owns every property on the west side of Meridian between 30th and 32nd streets, including the Stutz home on the far-north end.

The museum bought the Schnull-Rauch House in late 2008 from the Junior League of Indianapolis and rents it out for private parties and corporate events. Built in 1904, the home was featured last year as part of the St. Margaret’s Hospital Guild’s annual Decorators’ Show House and Gardens charity event.

The vacant Stutz house, built in 1920, is named for original owner and Stutz car company founder Harry Stutz. It was last occupied by a not-for-profit that helped incarcerated juveniles transition back into the community.

The museum has no plans to demolish any properties it owns except The Whitestone, Statz said.

Both the Drake and Whitestone became available in 2008 when Zender began attempting to unload its portfolio of 18 apartment complexes. Minus the two the museum bought, Zender is still shopping the portfolio but is closing in on a buyer, said Tim Zender, who runs the business with his four brothers and sisters.

The museum bought the buildings in part to help protect its turf.

“It was a case where we wanted to have kind of a known entity running them versus someone we might not know coming in and owning neighborhood property,” Statz said.

The museum had intended to operate both as apartments, Statz said, but the Whitestone was less than half occupied and several inspections determined that it needed a significant investment. The museum instead chose to vacate the complex and help tenants find alternative housing. It’s been empty about a year.

The Schnull-Rauch House is protected by its listing on the National Register for Historic Places, but Dollase is concerned about the future of the Stutz House.

“We want to see that stay rather than see it be demolished,” he said. “That’s really important to Indianapolis’ racing history and auto heritage.”

Under its TRex entity, the Children’s Museum also owns the property on which Illinois Place apartments was built last year along North Illinois Street, from 32nd to 33rd streets, where Winona Hospital once stood.