One Click Ventures, known for its variety of e-commerce sites, recently launched a new website and sold off others as it strives to meet hiring goals tied to economic development incentives.

The Greenwood-based online retailer announced Sept. 15 that it started a prescription eyewear brand called felix + iris and said it divested several of its clothing and accessories websites, including Scarves.net.

The company had as many as nine websites at one point, but began pruning itself in mid-2013. It now has three websites all focused on eyewear: SunglassWarehouse.com, Readers.com and felixandiris.com. 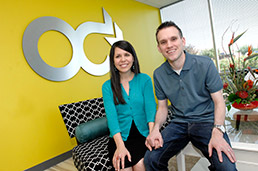 “Ultimately, Randy and Angie [Stocklin] decided that the best direction for the business was to go eyewear,” said spokeswoman Whitney Moorman about the husband-and-wife co-founders. “You could be really good at a bunch of things or you could be great at one thing.”

The moves come as the company works to fulfill its end of state and local economic development deals. In February 2012, the city of Greenwood gave the company $495,000 upfront toward a new headquarters and pledged up to $336,000 in additional hiring incentives.

In May 2012, the state announced a $1 million incentive package including tax breaks and training grants tied to the then-50-employee firm’s promise to add 109 jobs by 2017.

Moorman said the firm now has more than 60 employees, and expects to have 70 to 75 by year’s end. The employment goal related to the incentives is about 160, and Moorman said in an email, “We expect to exceed this.”

Company officials bill felix + iris as the only online retail site offering a tailored shopping experience for the over-40-year-old customer. It also touts its flat-rate pricing, an uncommon approach in the $20 billion North American eyewear industry.

The private-label frames will be manufactured overseas, Moorman said.

The company would not disclose financial information, but Moorman said in an email that “we expect felix + iris to be a key contributor to tripling the size of the overall business by the end of 2016.”