Demand for office space in the Fletcher Place neighborhood is driving the redevelopment of a building on South College Avenue that originally housed a bowling alley.

Deylen Realty, known for its apartment and office developments southeast of downtown, received approval from the Indianapolis Historic Preservation Commission earlier this month to proceed with the project. 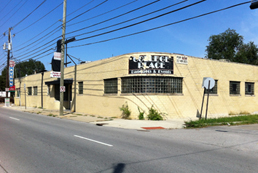 The art-deco building that’s attached to Iaria’s Italian Restaurant was constructed in the late 1940s as a 12-lane bowling alley. (IBJ Photo/Scott Olson)

Deylen principal Craig Von Deylen estimated the firm will invest about $1.2 million in the building, which should be ready for occupancy in the spring.

“We have a level of demand for people who want small offices in the neighborhood with no place to put them in,” Deylen said.

The developer is buying the one-story structure at 325 S. College Ave. from Linton Calvert, who operates the Fountain Square Theatre Building.

The art-deco building that’s attached to Iaria’s Italian Restaurant was constructed in the late 1940s as a 12-lane bowling alley. Calvert bought it in 1981, and five years later replaced traditional bowling with what’s known as duckpin bowling, which uses smaller balls and shorter pins.

Calvert ultimately moved the duckpin bowling operation in 1996 to the basement of his Fountain Square Theatre Building and covered the bowling lanes on South College Avenue to convert the building to a banquet hall.

He had tried to sell it previously without success.

“I had listed it a few times,” Calvert said, “but the economy had not found itself, nor was the market vested where we were.”

That stretch of South College, however, could get a boost from not only Deylen’s project but also plans from Herman & Kittle Properties Inc. to build 211 apartment units at the southeast corner of College and Maryland Street.

Deylen, meanwhile, is paying homage to the bowling alley by naming the office building The Pin. It totals 11,000 square feet that likely will be divided among three to four tenants with a lease rate of $16 a square foot, Deylen said.

Features will include an outdoor atrium in the center of the building and the installation of larger windows along the exterior. But perhaps the most important part of the rehab is the replacement of the terra cotta brick tile.

“The exterior of the building is in pretty bad shape,” Von Deylen said. “At least half of it is breaking off.”

The tile will be replaced with a similar match—an unglazed terra cotta brick that a company in Texas manufacturers. Meg Purnsley, an IHPC senior architectural reviewer, found the company and alerted Von Deylen to the matching material, he said.

The building actually predates the Iaria’s structure, which was built to match the exterior of the bowling alley, Deylen said.

Blackline Studio, which is co-owned by Von Deylen, is the architect for the project.

The redevelopment of the former bowling alley is the latest in a string of projects Deylen Realty has undertaken in Fletcher Place. Just to the south, Fletcher Place Terrace includes 2,000 square feet of office space, and Fletcher Place Lofts across the street on the east side of College, has 3,700 square feet.

The Hinge apartment and retail project on Virginia Avenue has shared workspace called The Bureau.

“Everything we’ve got is leased,” Von Deylen said.

Deylen’s latest project is the $10 million Slate. The 68-unit, mixed-use apartment project at 501 Virginia Ave, which includes 9,900 square feet of street-level retail space along the Cultural Trail, should be finished in the spring.