Home » When will corporate travel come back?

Six years have passed since insurance giant American International Group shocked the nation by spending $440,000 on a corporate retreat just days after being rescued by an $85 billion federal bailout, but the hospitality industry has yet to overcome the stigma that came to be called the AIG effect.

Trade groups backed by huge travel-dependent companies are preparing to launch a marketing campaign to persuade executives that it’s OK to spend again on retreats, meetings and travel.

Mindful of the recovering economy, and wanting to see the lucrative market come back, the U.S. Travel Association has hired Washington, D.C., public relations firm APCO Worldwide to hype the economic benefits and return on investment of conventions and corporate meetings. 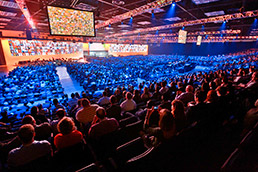 Tourism officials would like more conventions like the bash ExactTarget threw at the Indiana Convention Center in 2013. (Photo courtesy of Visit Indy)

Industry leaders in Indianapolis, where corporate travel has bounced back faster than at the national level, hope the campaign accelerates the recovery of smaller gatherings and fills in gaps between larger conventions.

“A coordinated, national campaign targeted at the right audience could be what’s needed to move the needle,” said Jim Dora Jr., CEO of General Hotels Corp., which owns 11 Indiana hotels including Crowne Plazas downtown and at the airport.

“If that happens, I think Indianapolis could be well positioned to take advantage. We have great amenities and we’re right in the sweet spot in terms of being a lower-cost destination. That’s a good place to be.”

Corporate travel accounts for about 20 percent of all travel and tourism revenue in the Indianapolis area, according to Visit Indy, the city’s tourism and convention marketing arm. Nationally, it’s nearly 40 percent of the $900 billion industry, according to the U.S. Travel Association.

Companies might be spending a lot more on travel by now had AIG not incurred the wrath of the public. Travel association CEO Roger Dow said the industry simply wasn’t prepared for the scale of the nearly instantaneous spending pullback by executives fearful of appearing to spend lavishly.

The number of corporate meetings nationally dropped from 2.15 million in 2007 to 1.84 million two years later—a 14.4-percent decline, according to the association and Convention Industry Council. 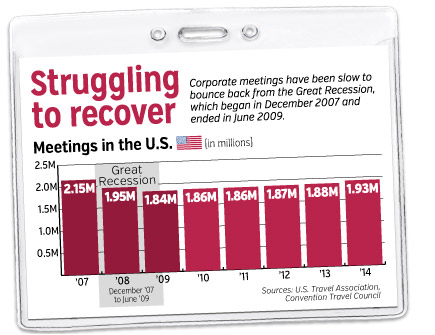 But those numbers don’t tell the whole story. Industry observers say fewer people showed up at the meetings, and those who did attend spent less money.

Association officials said the fallout has cumulatively cost the industry and cities like Indianapolis, which bank on conventions and other corporate gatherings, $2 billion a year. Local hospitality leaders believe the swoon cost Indianapolis in the tens of millions. 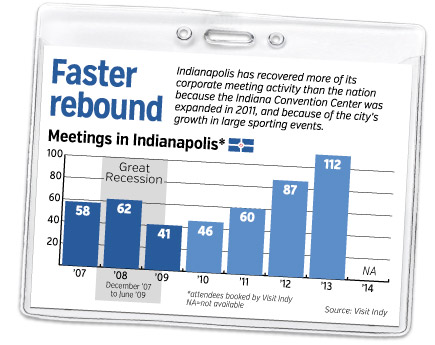 “We weren’t prepared to explain the positive impact these meetings have on a number of stakeholders,” Dow said. “It’s affected not only the companies and workers who make a living in this industry, but also cities like Indianapolis that host these meetings.”

While leisure travel was hurt during the recession, it didn’t decline nearly as much as corporate travel, industry experts said.

Activity is slowly edging back.

The USTA projects meetings rising 2.4 percent over the next year.

Still, the industry is fighting an uphill battle against the AIG stigma.

To accelerate the recovery, the USTA, with the help of local convention and visitors bureaus like Visit Indy, is launching a six-figure marketing campaign—one that is expected to grow to seven figures.

In January this year, the coalition hired APCO Worldwide, a Washington, D.C.–based public relations firm, and committed $500,000 to launch a targeted marketing campaign to hype the economic benefits and corporate return on investments of conventions and corporate meetings.

The campaign will target travel industry leaders and corporate meeting and convention planners, corporate CEOs, elected government officials and the media, he said.

“We want to use our resources to talk to a very specific audience,” Dow said. “We’re going to use personal outreach, direct mail and things like that to get our message across. This is going to be a long-term campaign for us.”

While Indianapolis isn’t a convention and corporate meeting mecca like Orlando and Las Vegas, its myriad sporting events and activities, along with its compact downtown and central location, have grown the area’s popularity for such gatherings, said Visit Indy Vice President Chris Gahl. Events like the Indianapolis 500 and Big Ten football and basketball championships are especially key in drawing corporate incentive travel—trips used in part to motivate employees, contractors and vendors.

“It’s important not only for people to understand the economic impacts these meetings have on places like Indianapolis, but also to understand the value of face-to-face meetings,” Gahl said. “Corporate meetings and conventions aren’t just junkets. They have a demonstrated return on investment.”

Locklear, the meeting planner, thinks the campaign—along with a boost from the improving economy—is already working. Wallets are opening wider, attendance is rising, and more exhibitors and sponsors are showing up.

That doesn’t mean the old days have returned.

“Executives and administrators now really have to be sold that there’s going to be a return on investment for sending somebody to a meeting or convention,” Locklear said. “That’s why I think this [USTA] campaign makes sense.”•