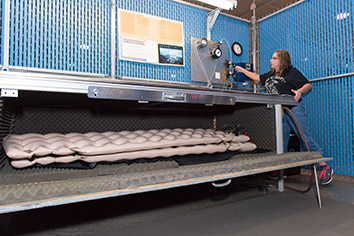 Like many small medical-device makers, Indianapolis-based EHOB Inc. derives nearly all its business from North America—95 percent of its revenue comes from the United States and Canada.

But those home markets aren’t producing the growth they used to. Annual sales growth for EHOB’s wound-preventing surfaces for hospital beds has come down to 5 percent from roughly 10 percent as recently as 2012. In the next two years, it expects growth of less than 4 percent a year.

That’s one reason EHOB is bulking up its presence overseas. It has hired additional sales representatives in Europe the past few years. And in May, it opened its first office in China.

“We are seeing some great opportunities really starting to pile up in the last 10 to 12 months, a lot of interest from a lot of government entities in China and Europe,” said President Scott Rogers. “It’s been pretty tough [in the U.S.] the last couple years.”

Indeed, the future of Indiana’s medical-device companies is increasingly overseas.

With growth hampered domestically for a host of reasons, device companies have turned to Europe, Asia, South America and the Middle East.

That’s true for both small and large companies. Bloomington-based Cook Group, which has roughly $2 billion in revenue, has grown its foreign sales from 50 percent of its total five years ago to 60 percent today.

Batesville-based Hill-Rom Holdings Inc. is looking to both buy and build a larger foreign operation as U.S. sales of its hospital beds shrink.

Warsaw-based OrthoPediatrics Corp., founded in 2007, pulls in a third of its nearly $30 million in annual revenue from overseas—and it hasn’t even tapped the lucrative Chinese market.

“There’s just not that much growth left in the U.S.,” said John Nadelin, Safis vice president of regulatory and compliance.

Makers of surgical implants and equipment have suffered the past five years as out-of-work Americans delayed elective procedures. Even those with jobs saw deductibles on their health insurance shoot up, causing them to put off some health care.

Since President Obama’s health reform passed in 2010, hospitals have been under intense pressure from the federal government and employers to cut costs. One of their first strategies has been to centralize purchasing of medical supplies, and push device makers for 20-percent price cuts, noted EHOB’s Rogers.

On top of that, medical-device makers say the U.S. Food and Drug Administration has pushed up costs by requiring more studies of products before they’re approved. For that reason, companies often find it easier to get approval in Europe first and then use the sales to sustain them while they await FDA approval.

“It makes it hard to compete with companies operating in lower-tax countries,” Cook Medical President Pete Yonkman wrote in an email, citing both the Obamacare excise tax as well as U.S. corporate tax rates—the highest among developed countries.

The issues have chased investors into other sectors and caused medical-device companies to resort to mergers to reduce costs.

Pete Kissinger, a serial entrepreneur in West Lafayette, is trying to raise money to fund a new company called Phlebotics, which has developed computer-operated blood-monitoring devices for hospitals. He said U.S. device makers are both pushed and pulled into overseas markets.

“Asia is not to be missed, and our government has been discouraging bold steps by thinking negative, scaring away capital and talking of taxing success,” Kissinger wrote in an email.

Medical-device companies have kept their average 25-percent profit margins steady the past four years by trimming costs, according to an Oct. 20 report by management consulting firm A.T. Kearney. But trimming has its limits. By 2020, Kearney predicted, profit margins will have shrunk across the industry to 16 percent.

“Companies will no longer be able to earn premium margins by simply selling clinical features and new devices into established market spaces. Rather, they will need to look at new segments,” Kearney consultants Dave Powell, Oliver Scheel and Bill Tribe wrote.

Hill-Rom, the hospital-bed maker, is seeking to do exactly what Kearney advocates. It is building new businesses in surgical and respiratory products while looking to grow in emerging markets.

It’s easy to see why: Hill-Rom’s U.S. sales for the nine months ended June 30 were 10 percent less than in same period in 2012, the year before the Obamacare tax on devices and cuts to hospital reimbursement took effect.

In June, Hill-Rom announced it would spend $250 million to acquire Germany-based Trumpf Medical, in large part because about a third of Trumpf sales are in such emerging markets as Latin America, Asia, the Middle East and Eastern Europe.

CEO John Greisch said during the Morgan Stanley Healthcare Conference for investors in September that Hill-Rom in the past year also launched a bed “more focused on the price points” of the emerging markets and invested “pretty significantly in feet on the street” in many foreign regions.

That growth was more than twice as fast as the 2.4-percent rise in sales from the Americas division of the Warsaw-based company.

Sales from Europe and Asia accounted for 46 percent of Zimmer’s total first-half sales of nearly $2.4 billion.

Biomet Inc., which Zimmer is acquiring, has seen better U.S. sales growth than Zimmer in recent years, but its foreign sales have still been growing faster than its domestic sales.

Getting a bigger foothold in emerging markets was one of the reasons Zimmer gave for its $13.4 billion purchase of Biomet, which is pending regulators’ approval.

“We will also benefit from strengthening our presence in emerging markets and an expanded portfolio that covers upper and lower joints, which will position us to grow our extremities and trauma business going forward,” Zimmer Chief Financial Officer Jim Crines told investors and analysts when the deal was announced April 24.

Both Zimmer and Biomet have been shifting manufacturing and sales resources to focus more on foreign markets—in no small part due to the Obamacare excise tax on medical devices.

For OrthoPediatrics, a much smaller orthopedics company, the faster growth of foreign markets has been the biggest reason it has expanded there, with U.S. concerns playing a secondary role, said CEO Mark Throdahl.

OrthoPediatrics developed a global strategy three to four years ago. In May, the company raised $39 million to build out its presence around the world.

Sales in its foreign markets are growing 40 percent to 50 percent per year, Throdahl said, while U.S. sales have grown half as fast.

Still, the U.S. medical-device tax hasn’t helped. OrthoPediatrics paid $300,000 last year in tax. But since the company still isn’t quite to a break-even point, it could pay that bill only by holding back on other expenses.

Throdahl said OrthoPediatrics would have added three or four more engineers to its nine-person product development team if it hadn’t had to pay the tax.

“It’s a very painful burden to have to bear, especially for a company that has no profit stream from which it can be paid,” Throdahl said.

Foreign markets are not for the faint of heart. Languages are different. Regulations for getting products approved are different—and in emerging markets, not always consistent. And protections of intellectual property can be different.

Cook Group, for example, sees look-alike versions of its arterial stents sold routinely in China—even though they do not have the special treatments of the metal Cook uses to make its products function.

Hill-Rom wants to build its presence in China, but even though the middle class has ballooned, it still doesn’t have the same kind of money to spend as U.S. customers do. As a result, Hill-Rom hasn’t figured out a way to sell its high-end hospital beds there profitably to the vast majority of hospitals.

“The price point that we’ve got with our products only is of interest to a very small percentage of the expansion that’s going on in China, and I’m not going to chase volume in those markets at the expense of margins,” said Greisch, the CEO. “And for us to compete in what I call the mass bed market in China, we’re not going to do it. We just can’t do it profitably.”

EHOB, the maker of hospital-bed surfaces, has spent four years building its presence in China, including training more than 15,000 nurses in wound care. But it has little to show for it yet.

Rogers, EHOB’s president, acknowledged that it will take years just to boost overseas revenue from 5 percent to 10 percent of its overall sales.