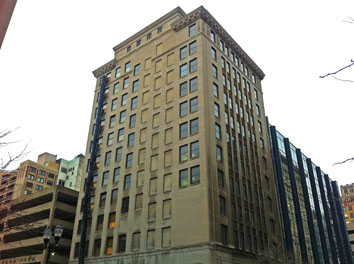 A local developer has purchased a vacant 12-story office building east of Monument Circle downtown and is embarking on renovation to return the property to its former prominence.

Loftus Robinson closed on the sale of the building at 129 E. Market St. on Nov. 10 and plans to invest $7 million overall, including $5 million to gut the entire interior, replace the heating and cooling system, and install new exterior lighting, among other improvements.

The property should be ready for occupancy next summer, said Drew Loftus, a partner of the Loftus Robinson development firm in Broad Ripple.

“The inside will be fresh and modern and the outside will be historically restored,” he said. “The building has a ton of character on the outside, and we want to bring that out.”

Constructed in 1923, the 54,000-square-foot building originally housed the J.F. Wild State Bank and was designed by Fermor Spencer Cannon, the architect of Butler University’s Hinkle Fieldhouse. The bank operated for just four years and closed in 1927.

Several small criminal defense firms last occupied the building located less than a block from the City-County Building, judging from the roster of tenants still hanging in the lobby. It’s been vacant for at least a few years, Loftus said.

Loftus Robinson bought the building from Crown Property Group, which owns the Stock Yards Bank & Trust Building nearly across the street at 136 E. Market St. Crown purchased the J.F. Wild building from Flaherty & Collins Properties in 2008 with intentions of renovating it.

Loftus Robinson has hired John Robinson and Jack Hogan of the local Jones Lang LaSalle office to list the building. Rent will run $18 a square foot. On-site parking is one of the building’s major amenities, Robinson said.

“It should be a great addition to the downtown market, to have this building modernized and updated,” he said. Robinson is no relation to Loftus’ business partner, Kyle Robinson.

Loftus Robinson is renovating the building from the top down and tearing out such outdated features as the drop ceilings and poorly configured offices that were installed during the early 1980s as part of a previous renovation.

The 4,500-square-foot open floor plates that have direct access to elevators, in addition to the exposed ceilings, should appeal to “progressive and creative” companies such as tech firms, Loftus said.

What Loftus Robinson is planning at 129 E. Market St. could build on the youthful, high-tech vibe on Monument Circle set by ExactTarget’s local base of operations in the Guaranty Building.

“That has set the tone for what tech companies are doing downtown,” Robinson said.

The architect on the renovation is DkGr.

Loftus Robinson’s projects include Fishers Switch: a $28 million mixed-use development under construction on the site of the Fishers Train Station. Plans call for a three-story retail/office building, a 50-foot-wide pedestrian plaza (with access to the train platform, which will remain in place), and a four-story apartment building wrapped around a 442-space parking garage.

At 720 N. Capitol Ave. in downtown Indianapolis, Loftus Robinson added a second story to a building now occupied by Rowland Design Inc. The firm also bought a trio of vacant, connected buildings at 6334 Westfield Blvd. in Broad Ripple and converted them into 9,000 square feet of office space for a project dubbed Rockdale.