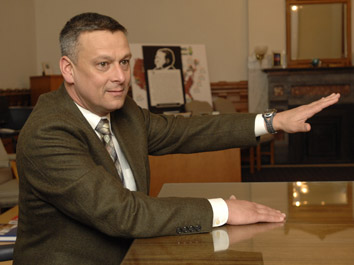 Bennett, who settled an ethics case over the summer for a $5,000 fine while admitting no wrongdoing, has not been charged. The AP obtained a letter Inspector General David Thomas wrote in Feb. 27, 2014, to Marion County Prosecutor Terry Curry after Curry said he never saw an investigator's entire 95-page report alleging wire fraud.

"The course of our investigation suggests that for several months prior to the 2012 primary and general elections, the evidence could support ghost employment involving Dr. Bennett and his staff as well as official misconduct," Thomas wrote.

The AP reported Tuesday that a February 2014 investigation by the inspector general had found more than 100 instances involving Bennett and his staff that could support wire fraud charges. The "ghost employment" suggestion is based on a state law barring officials from using their staff for political purposes.

Curry, who declined to charge Bennett in July, said Wednesday that he has requested a copy of the February 2014 report in which the inspector general's office recommended wire fraud charges. Curry said that he had received only a shorter report that was more limited in scope from Thomas in November 2013.

Curry, a Democrat, was not immediately available for comment after the AP obtained the letter about the "ghost employment" allegations.

"We were unaware of the February 2014 report and remained so until this week’s news story," Curry said in a written statement released Wednesday.

Former U.S. Attorney Joe Hogsett, who is now running for mayor of Indianapolis as a Democrat, declined comment through a spokesman. Hogsett was the U.S. attorney when the state investigation was delivered to his office.

Bennett had been a national star in conservative education circles before resigning his job as Florida's schools chief in August 2013 after the AP published emails showing he changed Indiana's school-grading system to benefit a top Republican donor's charter school.

A second report by the AP found that Republican Party fundraising lists had been downloaded to Bennett's Department of Education computers, and emails suggested staff had been doing political work in violation of the state's "ghost employment" law.

The internal report from the inspector general, completed in February, found far more extensive activity by Bennett. The report detailed Bennett's use of a state-issued car and state worker to attend high-dollar fundraisers, including one for then-presidential candidate Mitt Romney in 2012.

The state investigation — which is still being kept under wraps — also determined that state employees were used regularly for campaign work between Jan. 1, 2012 and Dec. 31, 2012.