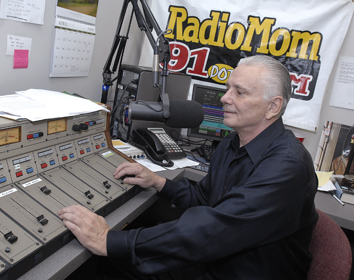 In one of the stranger twists in the history of Indianapolis media, it fell to a former professional wrestler from Delaware County, a white guy known as an escape artist, a sort of late 20th century Houdini, to bring rap music to Indianapolis radio.

"WTLC wouldn't play rap," Shirk said, referring to the Indianapolis station that dominated the ratings among black listeners, "and I saw an opportunity because, at that time, of the top 30 songs nationally, 15 were rap."

Rap was thought to be incendiary.

"There was resistance to it in the community," Amos Brown, a WTLC executive then who now hosts a black-oriented radio talk show, told The Indianapolis Star.

But younger people, black and white, craved it, as Shirk would happily discover.

He was an experienced but small-time radio station operator — over the years Shirk bought and sold nine Indianapolis radio stations — when the Federal Communications Commission awarded him a new FM signal in Indianapolis: 96.3. Despite its 330 watts, puny compared with the city's big stations' 50,000 watts, Shirk quickly made "Hoosier Hot 96" into a ratings powerhouse and forced other stations into playing more progressive hip hop music.

"I don't remember all the artists back then," Shirk said, "but I remember we played a lot of Biggie Smalls' 'Mo Money Mo Problems.'"

Shirk was doing a phone interview Monday from his 13,500-square-foot house on 12 acres outside Zionsville. It was the first day of his retirement, and he was spending it lazily: lingering with coffee over the newspaper, soaking in a bath tub. He planned to have lunch at Panda Express, and later, for fitness, there would be a 2-mile stroll around the home he shares with his wife and daughter.

Shirk arrived in Indianapolis in 1972 after acquiring WXLW on the AM band. He had moved from his hometown of Muncie, where he had been running WERK, a station owned by his father, a Muncie advertising executive.

One of Shirk's first competitors was Jeff Smulyan, who would go on to build the Indianapolis-based media conglomerate Emmis Communications. Smulyan bought WNTS the year after Shirk bought WXLW.

"Bill was different," said Smulyan, recalling an early Shirk promotion: "'WXLW has balls!' They said that over and over. What it was, they were giving away autographed basketballs."

Shirk is one of those people who is skilled in two wildly different disciplines, like a football player who also is a concert pianist. In 1977, he created buzz at the Indianapolis Auto Show as an escape artist. He freed himself from a straitjacket while suspended from the ceiling of the hall.

It was the same thing he had done at pro wrestling events staged by the legendary Dick the Bruiser. Later, Shirk actually got in the ring several times and mixed it up with other wrestlers. "It may be choreographed, but out of 10 punches one would land," Shirk said. "I got the hell beat out of me on numerous occasions."

He said he hasn't done any stunts in six or seven years, "other than to show someone how to get out of a straitjacket."

The truth was Shirk, whose real name is William Shirk Poorman, was a top-notch self-promoter, and his radio stations benefited from his wacky brand of fame. The stations also benefited from a hands-on management style that harked to small town 1960, when a station general manager would sell the ads and turn around and do the play-by-play for the high school basketball game.

As essentially a sole proprietor (though he did have investors), Shirk was more nimble than his corporate competitors. Shirk's stations could morph in a hurry, depending on market forces. At various times they broadcast Top 40, hip hop, even religion. "The core was Southern Baptist," he said, "teaching and some gospel music. Very popular. We did very well with that."

In 1994 he drew fire for airing programming on his WAV TV-53, the one television station he owned, that some people found sexually explicit. Shirk insisted it was merely "borderline." He explained later: "I was in a financial crunch."

"We've always said we could make any decision we needed to make in six hours," Smulyan said, "but Bill didn't answer to anybody. He didn't have a board, he didn't have public shareholders. He was just a classic entrepreneur. I always loved his energy. I'm stunned he's really retiring."

Although last week Shirk sold his last Indiana station, he retains a 24 percent stake in an 11-station chain in Hawaii. Those stations are for sale, too, he said.

Shirk's big score came in 2000 when, as investors' demand for radio stations peaked, he sold 96.3 FM and two smaller stations to the Maryland-based media giant Radio One for $40 million. Half the money was his, the other half belonged to his investment partner, Bill Mays.

Mays, who had wide-ranging business interests and was considered one of Indianapolis' top business leaders, died in December on his 69th birthday.

But that is not why Shirk, younger than Mays by five months, is retiring. "I loved Bill dearly, incredible individual, but my father is who I idolized. He retired at 70, and he said that's the age to do it."

Shirk, who still wears his signature pony tail, says he is an avid hunter and angler. He is heading to Florida in April to fish. "I'm really looking forward to it," he said.