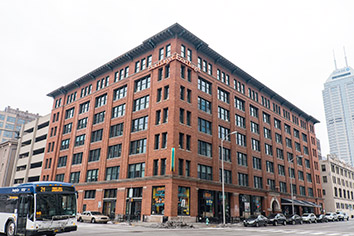 Real estate investors are cashing in on the local office market quicker than expected as properties change hands at prices not seen since before the recession.

Buildings attracting the most interest are those investors bought out of foreclosure, boosted occupancy and now are reselling for a tidy profit.

“The buyers who got into the market that bought some of these bank-owned deals have very quickly been able to re-tenant those,” said Rebecca Wells, an executive vice president of Jones Lang LaSalle’s capital markets group. “In some cases, these owners are going to be able to double their money.”

What’s perhaps most telling about the uptick in activity is the high number of properties reselling, or flipping, within mere months of previous sales.

Among them are the downtown Century Building, the northwest-side College Park Plaza and the Heritage Park I and III buildings on the northeast side. Also in the mix is the downtown Landmark Center, which several real estate sources say could sell soon.

Banks at one time took ownership of the properties except College Park Plaza, making them attractive investment opportunities to buy a building on the cheap.

Increased occupancy, low interest rates and a pent-up demand to spend money are driving deals led by out-of-state investors eager to dump cash in a market they consider more stable than cities such as Chicago, New York or San Francisco.

The local market last year saw 3.1 million square feet of space change hands, slightly above the 3 million that sold in 2013. But the amount in 2014 is much higher than the 1.8 million square feet that changed hands in 2012, or the minuscule 700,000 square feet in the year before, according to statistics from Summit Realty Group.

At the same time, local office occupancy has climbed from roughly 78 percent in 2011 to 84 percent in 2015, at a time of continued low lending rates, giving investors more reasons to dip their toes back in the market.

Turnaround for the Century

The Century Building is a prime example of a quick flip for a big profit. Zeller Realty Group bought the seven-story building at 36 S. Pennsylvania St. out of receivership in December 2013, paying $5.8 million.

Just last month, the Chicago-based real estate firm sold the property for $13.8 million to Beloit, Wisconsin-based Hendricks Commercial Properties, though a Zeller executive is quick to point out the company sunk $2 million in improvements into the building.

At the time of Zeller’s purchase in late 2013, Steak n Shake had just vacated two floors by moving to the Ober Building at the southeast corner of Pennsylvania and Maryland streets.

“Our 36-month business plan [to sell the building] got accomplished in about 14 months,” he said. “What this is really an indication of, more than anything else, is that money is back in Indianapolis investing.”

“You’re going to see a lot of properties trading in 2015,” said Wells, of Jones Lang LaSalle. “It’s all a function of sellers wanting to capitalize on these good market conditions.”

Griffin Capital sold the building to Onward for $14.3 million—nearly double the $7.4 million Griffin paid in November 2013.

Alex Cantu, a vice president of capital markets at Summit Realty Group, which represented Griffin Capital in the sale, said the transaction represents the strength in the fundamentals of the suburban office market.

Occupancy is tight, particularly in the Keystone and North Meridian submarkets, leading rents to rise at least $1 per square foot in some buildings.

As occupancy increases, and the bank-owned properties left from the recession get scooped up, investors are searching for more stable properties, Cantu said.

“There’s just less risk associated with those opportunistic deals,” he said. “They have a stabilized rent roll, to some extent.”

Count the Landmark Center among the growing list of properties that have become “stabilized” through increased occupancy.

The local Ambrose Property Group bought Landmark out of receivership in December 2013 for about $8 million. The 12-story, 315,000-square-foot building was only about 30 percent occupied. But just a few months later, in March 2014, Ambrose signed tenants Angie’s List Inc. and the Disciples of Christ, taking occupancy to more than 90 percent.

Ambrose put the building back on the market and has a pending buyer in Princeton, New Jersey-based Fairbridge Partners, real estate sources said. Ambrose President Aasif Bade did not respond to a request for comment.

On the northeast side, Heritage Park I and III near Interstate 69 and Shadeland Avenue were purchased for a combined $7.4 million out of foreclosure in September 2012 by Mount Kellett EP Heritage I LLC. The New York-based firm resold the buildings totaling 166,154 square feet to Bloomington Hills, Michigan-based Alidade Capital in November 2014 for $10.6 million. The buildings are nearly 80-percent occupied.