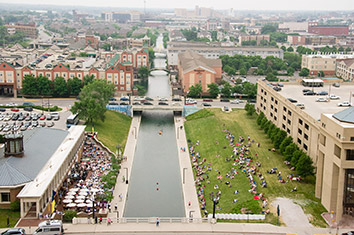 Indiana is working on plans to build a $25 million state archives building on the Central Canal downtown, taking up green space and adding another institutional user to the Canal Walk.

The canal site, across from the Indiana History Center, beat out three other locations the state evaluated, including a vacated American Legion building on North Meridian Street, a strip of land on West Washington Street, and a site between the Indiana State Museum and NCAA headquarters, State Archivist Jim Corridan said.

“It’s being highly considered as the location,” Corridan said.

Archivists and researchers are thrilled that 200 years’ worth of historical records—including the 1816 and 1851 constitutions—could finally move out of a warehouse with no climate control to a downtown spot that’s easily accessible to the public.

But the canal site is drawing some opposition from a citizens group that wants the space preserved as a park. The location also raises the question of how the archive will serve canal users who aren’t stopping by to research the state’s history.

The canal-side site isn’t necessarily the cheapest place to build, but it makes the most sense for information-seeking patrons, Corridan said. It’s convenient to the State Library on Ohio Street and the not-for-profit Indiana History Center. In addition, archivists will be able to ferry documents through the underground tunnels that connect to the Statehouse, he said.

The canal stretches between the state-owned White River State Park and city land. Downtown Indy has a pending contract to manage events on behalf of the city, and Seiwert said she’s begun meeting with canal stakeholders.

Seiwert was aware of the state’s plans to build on the canal, but she said she hadn’t yet spoken to any state officials. She declined to comment on the merits of the archive project before seeing designs or knowing other details.

Jeff Hutson Favorito, owner of Old World Gondoliers, assumes the new archive will draw some visitors, and he thinks the building is a good use of a marginally attractive green space.

“This is a good fit with us because we celebrate history and culture,” he said.

Indianapolis and the state agreed to a land swap that will give the state control over the entire long, narrow bank. The city will receive a state-owned parking lot, which is needed for the proposed 21c hotel, next to Old City Hall.

Corridan said the canal-side location works well with other museums because the archive will have its own exhibit space.

“The Legislature has been very strong on making sure people have access to things in our collections,” he said.

State planners are also aware that the canal is mostly used by joggers, dog walkers and strolling families. There has been some discussion about the possibility of incorporating a retail use, such as an ice cream shop, into the design, Corridan said. But such a use couldn’t take up much building space or threaten the integrity and security of documents, he said.

The archive sees about 2,500 visitors a year in its current location, and Corridan predicted the canal site would at least double that. He admitted, however, that it’s impossible to make a good estimate because the archive has never been housed separately, or with such prominence.

Parking would be in metered spots on the street, or patrons could use the Indiana History Center parking lot, Corridan said. 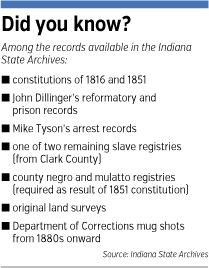 The Senate-approved version of the budget bill contains $25 million for the project, from design to furnishings. Corridan said the building will be about 60,000 square feet, which is enough to accommodate existing records and 40 years of growth.

Stephen Towne, president of the Friends of the State Archives, said the building at 6440 E. 30th St. that now holds the state’s archives is a simple pole barn.

“It just wouldn’t stand up in a storm,” he said.

The archive includes the original state constitutions, slave records, all of the state’s laws and Supreme Court decisions, as well as popular items like prison records of John Dillinger and his associates.

While the constitutions are in a vault, the rest of the building lacks climate control, a situation that’s probably taken 100 years off the life of the documents, Corridan said.

With the $25 million appropriation nearly in hand, Towne told members at a recent meeting, “Evidence suggests our relentless—and I underline relentless—message has been heard.”

Architects apparently are eager to bid on the project. A request for information issued by the Department of Administration last fall netted four finalists, Corridan said. The IDOA did not respond to an IBJ request for the responses or the names of the respondents.

The state isn’t likely to take further action until the budget is finally approved and money is available in the 2016 fiscal year, which starts July 1. Corridan said the IDOA could choose an architect from the current pool of finalists.•