Home » Hampton Inn slated for Keystone at the Crossing 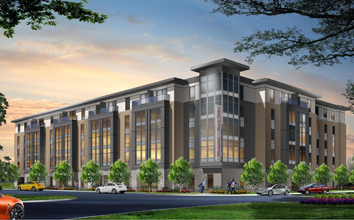 A 125-room Hampton Inn & Suites is coming to the Keystone at the Crossing area as part of a mixed-use development from PK Partners.

Hilton Worldwide announced Wednesday that it has signed a franchise license agreement with Indianapolis-based PK Partners to develop the five-story hotel, to be located north of the Fashion Mall at Keystone at 8980 River Crossing Blvd. Construction should start later this year with an opening in 2016.

The hotel will be owned by PK Partners and operated by locally based Schahet Hotels Inc.

The Hampton will offer free Wi-Fi, a 24-hour business center with complimentary printing, an 800-square-foot meeting space that can accommodate up to 80 people, and a fitness center.

The hotel will be part of PK Partners' $80 million River North at Keystone development, which broke ground in March. With city assistance, the developer plans to build a 120,000-square-foot office building and 300-space parking garage as part of the project. River North also will include a five-story, 121-unit apartment building; a mixed-used building with 28 condos; a four-story, 47-unit apartment building; and a 54,000-square-foot office and retail building.

Gene B. Glick Co. and PK Partners are likely to occupy about 35 percent of the space in the larger office building.