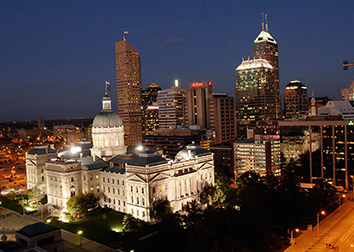 Indiana lawmakers adjourned for the year late Wednesday after passing a two-year, $31.3 billion budget that boosts funding for schools and leaves the state with slightly less money in reserves.

The budget passed the House and Senate just a minute before a midnight deadline along party lines and moves to Gov. Mike Pence, who is expected to sign it into law.

He called it “a budget that’s going to make a historic commitment to our traditional K-12 schools.”

And House Ways & Means Chairman Tim Brown, one of the key budget architects, said the spending plan meets the goals of a balanced budget and more dollars for schools and infrastructure.

Lawmakers touted their 2015 meeting as an “education session” – in large part due to the budget. It allocates an additional $460 million for K-12 education, which provides a 2.3-percent increase in both fiscal years 2016 and 2017.

That money will be split among public districts, charter schools and private school vouchers with an emphasis on closing the gap between growing suburban districts that generally receive lower-per student funding and shrinking urban schools that receive higher per-student funding.

And it sparked substantial complaints among Democrats – even though Republicans say the impact on urban districts won’t be as harsh as an earlier version of the budget would have been.

Rep. Greg Porter, D-Indianapolis, said his district – Indianapolis Public Schools – will see a $10 million loss, money that will essentially be shifted to Hamilton Southeastern Schools in an more affluent suburb just a few miles away.

And he said 137 districts would suffer cuts under the budget plan in 2016, with another 116 losing money in 2017. Many of those schools are losing students.

And Senate Minority Leader Tim Lanane, D-Anderson, said the school-funding formula is a tool Republicans have “devised to determine whose future to invest in and whose to pass over.”

“We’re better than choosing winners and losers,” he said. “Sadly, Republicans are sabotaging the educational outcomes of some of our children.”

“Even though a 2.3-percent increase doesn’t seem very impressive, it’s a lot when you’re working from a basis of $7 billion,” he said. “I do think it shows a commitment to education.”

More than half the state’s budget is dedicated to K-12 schools and higher education.

The budget also creates a new $500-per-student grant for charter schools. Charters with grades of an A, B or C would qualify for the extra cash automatically but those with D or F grades would have to prove they are performing as well or better than traditional public schools in the area.

Pence had pushed for the charter school grants – although he wanted three times that much – to solve what he called an inequity in funding. Currently, charter schools receive no revenue from property taxes, which traditional public schools use for construction, transportation and some utility costs.

The budget also creates a $100 tax credit for teachers who spend money on supplies for their classrooms. That had been a priority for House Republicans, who had originally sought double that amount, but Senate Republicans pushed them lower.

The plan passed Wednesday will leave the state with about $1.8 billion in reserves. That’s roughly 12 percent of state spending – down slightly from recent years. But Senate Appropriations Chairman Luke Kenley, R-Noblesville, said it’s enough to maintain the state’s AAA bond rating, which reduces the cost of borrowing.

“If we have a downturn steep enough to threaten that, then no amount of money in reserve is going to be enough,” he said. “I think it’s a prudent number and obviously the legislature does, too.”

– Funds the governor’s regional cities initiative, which will provide grants to the state’s medium sized communities for growth and quality of life initiatives. The program will be funded by a state tax amnesty program;

– Allocates an extra $100 million each year – above the normal stream of highway funding – to special road projects. And it allows the State Budget Committee to approve more;

–  Authorizes the state – if the money is available – to pay off loans it owes the federal government for unemployment payments the state couldn’t make during the last economic downturn.