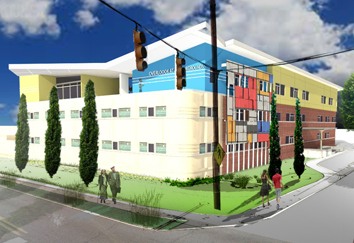 A local affordable housing developer is embarking on a project in a challenging area near the Indiana State Fairgrounds that’s attempting to rebound from years of neglect.

BWI LLC has purchased a vacant industrial building on East 38th Street near Fall Creek Parkway and plans to spend $11 million to convert it into 49 affordable and market-rate units.

Dubbed Overlook at the Fairgrounds, the project sits just east of the busy 38th Street/Fall Creek intersection that could play an integral role in the city’s mass-transit plans. The Green Line would follow the old Nickel Plate rail line from Indianapolis to Noblesville along Fall Creek Parkway and intersect the Purple Line at 38th Street.

The project also could benefit from its proximity to the fairgrounds and the Fall Creek Trail. The bike trail bounds the building and runs along the creek, hooking up with the Monon Trail south of 38th Street and east of College Avenue.

“We care about this area and think it’s a great project,” said Tedd Grain, deputy director of the Local Initiatives Support Corp.

LISC helped fund the Northeast Corridor Quality of Life Plan for the neighborhoods bounded by 56th Street to the north, 16th Street to the south, Sherman Drive to the east and College Avenue to the west.

The not-for-profit is not involved in BWI’s project but helped finance one of its other developments—the Clifton Square affordable senior housing project at 30th and Clifton streets on the west side.

BWI will fund Overlook at the Fairgrounds with a mix of affordable housing tax credits from the state and federal Community Development Block Grant funds, in addition to bank loans and private equity, company President Gary Hobbs said.

The developer plans to break ground in July and finish next summer. The one- and two-bedroom units will range from 675 square feet to 950 square feet and run from $400 to $900 per month.

“Being able to see something other than a dilapidated building here will be nice,” said Hobbs while referring to it as an “eyesore.”

BWI plans to add a third story to the building, bringing it to 80,000 square feet. A rooftop deck will be added to the small, single-story portion that fronts 38th Street. That space will be used for events.

Units along Fall Creek will be outfitted with balconies to give residents a view of the waterway. The greenspace and overgrown banks will be cleared by Citizens Energy, which owns the property, to make the property more attractive, Hobbs said.

The redevelopment of the building comes as the United Northeast Community Development Corp. spearheads an effort to help qualifying homeowners improve their residences. The organization is partnering with Habitat for Humanity to use $235,000 in federal funds to make interior and exterior improvements.

Amandula Anderson, director of the United Northeast CDC, said redevelopment of the property is long overdue.

“It’s almost a gateway into our neighborhood,” she said. “For us, it’s an opportunity to show that the east side is coming back.”

The Overlook at the Fairgrounds would follow the 248-unit East Village at Avondale apartment project in offering new housing options in the neighborhood. The $27 million Avondale is farther east, where the crime-ridden Meadows complex once stood.