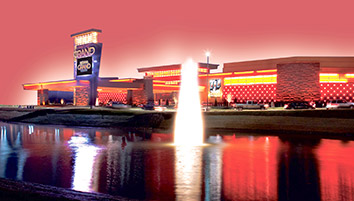 Indiana lawmakers bought the state’s embattled casino industry time, but the new protections might not be enough to ensure each gambling parlor’s long-term survival.

At least one Indiana casino executive says this year’s major gambling legislation wasn’t enough to help him deal with competition from Ohio and within the state.

“We’re scratching our heads, trying to figure out how to stay relevant,” said Dan Lee, CEO of Nevada-based Full House Resorts, which owns the Rising Star riverboat casino in Rising Sun, a tiny town on the Ohio River near Cincinnati.

Rising Star’s situation illustrates how difficult it’s becoming for Indiana to balance the varied interests of 13 casinos while also protecting them as a group from competitors in Illinois, Ohio, Michigan and Kentucky.

“This bill was to stop the bleeding,” said Rep. Tom Dermody, R-LaPorte, who authored House Enrolled Act 1540. “I don’t think this guarantees anything long term.”

All three casinos near Cincinnati have suffered since Horseshoe Cincinnati opened in March 2013, but Rising Star is especially ill-situated. It’s sandwiched between Hollywood Casino in Lawrenceburg to the north and Belterra to the south, so even gamblers from Indianapolis and Kentucky have to bypass other casinos before they reach Rising Star.

After many years of discussion, lawmakers finally agreed this year to allow riverboat casino owners to replace the boats with buildings on land. The owners of Tropicana in Evansville and Majestic Star in Gary have indicated they intend to make the move. In each case, moving to land would eliminate a long walk from the parking lot.

Full House’s previous CEO, Andre Hilliou, had also lobbied for the right to move to land, but Lee, the former CEO of Pinnacle Entertainment, doesn’t think that kind of investment would help. (Lee was installed at the small publicly traded company in October as part of an activist-investor coup.) Rising Star has plenty of convenient parking, he said.

And in 2021, the riverboats that compete with central Indiana’s two racetrack-casinos for Indianapolis-area gamblers could lose their remaining advantage: live-dealer table games. The new legislation allows Hoosier Park in Anderson and Indiana Grand in Shelbyville to seek permission to replace electronic games with live dealers in six years.

“It was very odd public policy,” Lee said. While waiting until 2021 isn’t the immediate benefit that racino owner Centaur Gaming wanted, Lee said it’s enough assurance to boost the value of Centaur’s properties and give the company a chance to sell.

Centaur Vice President and General Counsel John Keeler didn’t rule out the option of a sale, but he noted Centaur shelled out $500 million for Indiana Grand just a little over two years ago—a big investment to recoup so quickly.

Keeler added that the competitive landscape could change dramatically in the next six years. There’s still the potential for more competition in Illinois, Kentucky and Michigan, he said. Centaur is especially wary of plans by the Pokagon Band of Potawatomi Indians to build a casino in South Bend. With a hotel and tax-exempt gas, cigarettes and alcohol, a tribal casino could easily pick off those gamblers who drive to Hoosier Park from towns north of Anderson, Keeler said.

Dermody said the six-year delay on racino table games was written based on feedback from riverboat owners, including Lee. It’s supposed to give them time to adjust their business models, he said.

Lawmakers also recognized the impact table games in central Indiana could have on the historic French Lick Resort. Centaur must pay $2.5 million a year for community support in French Lick, and the state will eliminate the French Lick casino’s admissions tax.

All Indiana casinos will have the immediate benefit of up to $7 million in tax-deductible free play. Free-play coupons are a huge marketing tool, but in Indiana those wagering dollars, though they belong to the casinos in the first place, count toward the casinos’ taxable income.

The free-play tax benefit is supposed to help Indiana casinos counter offers from their competition in Ohio, where free play isn’t taxable at all.

Centaur will issue free-play coupons and might even buy the right to deductions above $7 million from smaller casinos, Keeler said. This year’s gambling legislation made the tax deduction transferable.

Mike Smith, president of the Casino Association of Indiana, which represents eight of the 13 casinos, said the industry has shrunk itself enough since the 2007 peak—when Hoosier casinos offered a total of 19,000 games—to avoid closing entire properties.

That number is down about 4,000 since then, or the equivalent of closing multiple smaller casinos, Smith said. Although electronic gambling machines far outnumber live dealers at all Indiana casinos, it still costs about $20,000 to maintain each machine, he said.

Just as lawmakers have given up on the notion they could preserve the more than $850 million in revenue casinos once generated, the local industry is lowering its expectations. Recognizing that Gov. Mike Pence would never permit an expansion of gambling, the industry consented to capping the number of games at the 2007 peak.