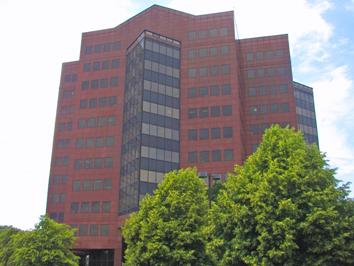 IBJ reported the pending sale in April, but the deal didn't close until last week.

Ambrose bought the building out of receivership in December 2013 for about $8 million.

The complex was only about 30-percent occupied after insurer Baldwin & Lyons Inc. left the building and moved its headquarters to Carmel.

Ambrose invested roughly $5 million in the building and added a fitness center and yoga studio, full-service cafeteria and conference facility.

Less than 90 days after closing on the sale, Ambrose had the building almost completely leased, mostly due to the additions of Angie’s List Inc. and the Disciples of Christ.

Landmark currently is 94-percent leased, with six years remaining on the average lease term, Fairbridge said. The company expects the center to be fully occupied by late summer.

Fairbridge said it was drawn to the building by its excellent condition, stable tenant roster and ideal location, just south of Interstate 65 and the northern edge of downtown.

“On every one of these counts, Landmark Center perfectly fits the profile of assets in our portfolio,” Fairbridge founder and managing partner Dmitry Gordeev said in a written statement. “It is in outstanding condition with first-rate tenants and a location in a low-vacancy area.”

The complex was built in 1984 and counted Emmis Communications Corp. among its first tenants.

Fairbridge has recruited the local office of DTZ to manage the property.