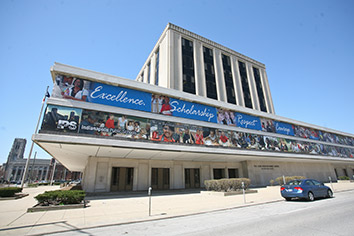 Caitlin Hannon, a former Indianapolis Public Schools teacher who joined the school board in an effort to push for change in the district, has stepped down, but she hopes to return to a key role in education in the city soon.

Hannon resigned Monday to accept an “education entrepreneur” fellowship from The Mind Trust. She will work toward launching a new not-for-profit with a goal of creating a shared-enrollment system that would allow families to apply for both IPS and charter schools on one form.

That’s an idea Hannon has championed as a board member.

“We want to do everything we can to make sure that parents have access to choices, both within the district, and for me personally, outside of the district as well,” she said about the idea earlier this year. “We have ton of choice (in Indianapolis), but we don’t have a ton of clarity around navigating that system.”

Hannon grew up in suburban Indianapolis and worked as an education policy adviser in New York City before she returned to become a teacher through the national teacher recruiting organization Teach For America at Arsenal Tech High School and Emma Donnan Middle School. Then she ran for the school board in 2012. She will also leave her job as the Indianapolis executive director of Teach Plus, a national organization that pushes for teachers to get involved in education policy debates.

Hannon was one of three new school board members who ran three years ago on similar platforms that advocated for more autonomy for schools, less central office spending and other changes. She was elected along with newcomers Sam Odle and Gayle Cosby, and the three helped force out then-Superintendent Eugene White and hire Lewis Ferebee as his replacement.

Hannon has said a shared-enrollment system would help parents find schools that best fit their children's needs and reduce confusion about which students are enrolled at which schools, an uncertainty that causes some schools to scramble during the first month to track down students who don’t show up. But she also argued such a system would provide better data about which schools are in demand and which are not.

“This new venture will allow me to work even more closely with families to help them navigate the school selection and enrollment process,” she said in a written statement. “I am thrilled to work to empower parents with better information and to simplify the system for families.”

The board will appoint a replacement to fill out the remainder of Hannon’s term, which runs through the end of 2016. District officials said there is no timetable yet for when the appointment would be made.

“We now look ahead to filling her seat and continuing with the momentum we’ve had over the past years and months,” board President Diane Arnold said in a written statement.

“I believe her work on this exciting new initiative will be beneficial for Indianapolis,” he said in a written statement.

Sharing enrollment in one system, Hannon and others have argued, would allow district and charter schools to more efficiently plan their staffing and would make it easier for parents who are trying to decide whether to send their children to IPS or to a charter school.

But some skeptics are wary that the plan could either promote charter schools in a way that would hurt IPS enrollment or dampen competition for students by making the selection process more bureaucratic.

Hannon is just the ninth such fellow since 2008 for The Mind Trust’s program that selects innovative education ideas from anywhere in the world and incubates them on the condition they are launched in Indianapolis. The fellowship will pay her a salary and provide support as she crafts her idea. Past winners include Earl Martin Phalen, who used the fellowship to create Summer Advantage, and Mariama Carson, who is developing a dual language immersion charter school.

The Mind Trust operates a separate fellowship that supports educators who want to develop ideas for turning around low-scoring IPS schools.

Founded in 2006, The Mind Trust is a non-profit based in Indianapolis that aims to improve learning in the city by supporting educational change.