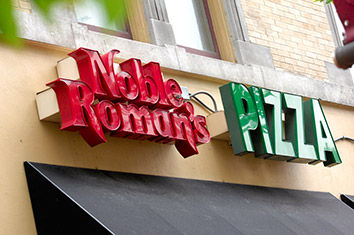 Noble Roman’s Inc. is ramping up its efforts to grow the company’s take-and-bake pizza business.

The Indianapolis-based franchisor of Noble Roman’s Pizza and Tuscano’s Italian Style Subs in the past two months has increased its product presence in supermarkets and hired an executive to oversee grocery operations. At the same time, the company has secured more financing to help achieve the growth.

Noble Roman’s on Tuesday reported second-quarter revenue of $2.2 million, up slightly from $2.1 million in the year-ago period.

“Interest in our grocery store venue continues to expand, and we are building the network to enable us to take advantage of this opportunity by adding distribution centers, which gives us new potential customers for further expansion,” said Paul Mobley, Noble Roman’s chairman and chief financial officer, in a prepared statement.

Ruehl’s career includes stops at Kroger, SuperValu, Unified Grocers and, most recently, CSM Bakery Solutions’ BakeMark division, where he was responsible for sales, marketing and brands for 1,500 bakery and food-service operations.