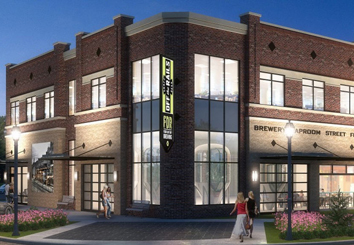 A new brewery is planning to open in a nearly $5 million mixed-use project proposed for downtown Fishers.

A partnership of Nickle Plate Development LLC and Four Day Ray Brewing LLC responded to the Fishers Redevelopment Commission’s recent request for proposals to develop the half-acre site at Lantern Road and North Street, which currently is a temporary parking lot. City officials are moving forward on incentives for the project.

The redevelopment commission received two submissions for the property at 11671 Lantern Road, but initially rejected both in July. City officials continued negotiations with Nickle Plate and Four Day Ray. An incentives package for their proposed project is set to be discussed by the Fishers City Council on Monday.

The estimated $4.8 million project includes plans for a 16,000-square-foot, two-story building with the brewery, taproom and restaurant occupying the first floor and 8,000 square feet of office space for three tenants on the second floor, according to documents IBJ obtained through a public records request.

Nickle Plate and Four Day Ray initially requested the land from the city at no cost, real and personal property tax abatements, and permit and impact fee waivers. They also asked the city to shoulder costs for public improvements including burying utility lines, removing the existing parking lot and grading the property.

The city is now offering the land at no cost, the waiver of fees, and a 10-year real and personal property tax abatement valued at $235,984.

Fishers Mayor Scott Fadness said he liked that the project provided much-needed office space and that the two-story structure seemed to fit its surroundings.

“I love the look of the architecture,” Fadness said. “The area this is going kind of fits that two-story village type feel.”

Chris Welsh and Matt Troyer are principals in Nickle Plate. They also are partners in Four Day Ray with Brian Graham and Mitch Ackerman.

An estimated 6,000 patrons would visit the building every month, according to project documents. The restaurant would serve “high quality international street food” with the menu changing frequently and would use the public sidewalk for outdoor seating,

The name "Four Day Ray" comes from a slang term used during the railroading era that described someone who consistently took one day off every week. Ackerman and Graham initially planned on opening in Westfield, according to the RFP response.

The other proposal the RDC considered came from SLG Partners LLC. Project documents showed a 27,000-square-foot, three-story building with a restaurant and retail on the first floor, office space on the second level, and residential housing on the third floor.

A total of 17 parking spaces would have been provided. The project would have cost $2.3 million, according to the documents.

The developers requested the land at a reduced or no cost, and either tax increment financing district funds or that the city issue bonds for infrastructure and soft costs.

Fadness said he liked the proposal, but the parking would have only been enough for the residential tenants.