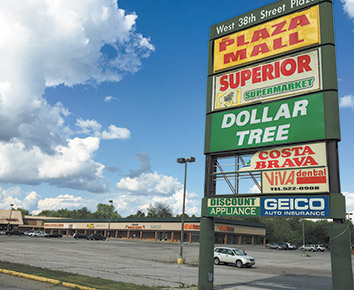 A Cincinnati bank that won a $2.1 million judgment on personal guarantees from Centre Properties founders Craig Johnson and James Singleton took the extreme action recently of having bank accounts frozen after the pair did not pay up.

“There are several accounts that have been frozen. Checks are bouncing. My client—he is unable to pay his expenses,” Deborah Caruso, a Dale & Eke attorney representing Johnson, complained during an Aug. 11 court hearing that culminated with a judge ordering U.S. Bank to back off for now.

U.S. Bank began closing in on the pair—who founded Centre in 1985 and have developed more than 2 million square feet of retail space in the Indianapolis area—after Centre affiliates that own properties along East Washington Street and in the Lafayette Square area defaulted on a $7 million loan.

U.S. Bank in December sued to foreclose and to collect on the limited personal guarantees from Johnson and Singleton. A month later, the Centre affiliates filed for Chapter 11 bankruptcy protection. While that automatically stayed the case against the affiliates, the bank pressed on against Johnson and Singleton and secured a $2.1 million judgment July 21.

Attorneys for the affiliates argue the protection is justified in light of Johnson’s and Singleton’s commitment to provide money for capital expenditures on the aging properties. But U.S. Bank argues the entire plan is fanciful—built on unrealistic financial projections and funded with tenant rents to which it has first dibs.

“The Debtors have not proposed a plan of ‘reorganization,’ but a scheme to impede the Bank from enforcing its rights to collect on the guarantees of the insiders,” U.S. Bank said in a filing.

The bank added: “The simple truth of the matter is that the Debtors have been unable to meet their mortgage and other financial obligations from the cash flow of the properties for years, and there is no reason to legitimately believe this would change under the Plan. The Debtors’ plan is truly nothing more than one great big visionary scheme with no basis in the Debtors’ historical or current financial performance or realities.”

Indeed, two of the properties—the 166,000-square-foot East Washington Centre and the 152,400-square-foot West 38th Street Plaza—are run down, with weeds popping up in the parking lots, an abundance of vacancies, and many of the tenants operating under month-to-month leases. The only property in ship shape is a Lafayette Road building leased to Key Bank.

Things got even more interesting in late July, when U.S. Bank launched garnishment proceedings against Johnson and Singleton. That prompted the Centre affiliates the same day to file a motion asking bankruptcy Judge Jeffrey Graham to shield Johnson and Singleton by extending the automatic stay to also cover them.

“To allow U.S. Bank to proceed with collection of the Judgment would not only distract the Limited Guarantors at this critical juncture, but would jeopardize the Debtors’ operations and the Debtors’ ability to successfully implement the plan,” the filing said.

The judge agreed to do so the afternoon of July 31, but the parties later learned that earlier that day garnishment paperwork already had gone out to 15 parties, including Fifth Third Bank.

At an Aug. 11 hearing, attorneys for U.S. Bank argued that accounts already frozen should remain so. But Graham disagreed, ordering that Johnson and Singleton should regain access to their accounts, but only for the purpose of paying customary living expenses—and only until he rules on whether to accept the reorganization plan.

The reprieve could be short-lived. The hearing on whether to confirm the reorganization, which began on July 23 and continued the next day, is scheduled to resume Aug. 20.•