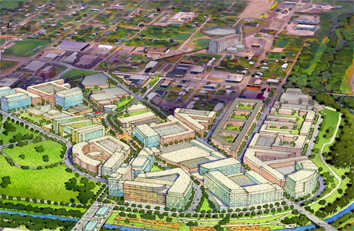 The Central Indiana Corporate Partnership wants the city to sell $75 million in bonds to improve streets, walkways and other infrastructure around the fledgling 16 Tech development on the edge of downtown north of the IUPUI campus.

A proposed resolution for the sale of tax-increment financing bonds will be introduced Monday night at the City-County Council meeting, according to a document posted on the city’s web site Friday morning.

Designed in part to attract high-tech businesses and medical research, 16 Tech is a 170-acre project that runs from 10th to 16th streets, bordered on the west by White River and on the east by Fall Creek. The White River Trail runs through the development.

Of the bond proceeds, nearly $59 million would actually go for infrastructure improvements in the 60 acres where new developments are planned, said Betsy McCaw, chief operating officer of CICP, which is a not-for-profit group formed by the chief executives of the region’s largest corporations, charities and universities. It is leading an entity called 16 Tech Community Corp., which is the entity that has requested the bonds.

Roughly half of that $59 million would pay to move water lines and wells connected to a pump house located near 16 Tech that is part of the city’s water system. The rest of the funds would pay for green spaces, walkways and roads, including a new bridge across Fall Creek that would connect 16 Tech to the IUPUI campus.

“The bonds are really to enable to development,” McCaw said, noting that many local groups have expressed interest in having a presence in 16 Tech, but need to be sure the project will have basic infrastructure in place.

She added, “We need a real physical place that is a magnet for talent that we can point to and say, ‘Things are happening here.’”

It's still in its earliest stages. The initial designs for the 16 Tech development include open public spaces and a multi-acre central park. When fully built out over the next 15 to 20 years, 16 Tech would have 2.8 million square feet of office space for high-tech businesses, academic and health care uses; 1.7 million square feet of residential space; and 600,000 square feet for retail, hotel and amenities.

The Central Indiana Corporate Partnership and its subsidiary, BioCrossroads, want to turn 16 Tech into what it calls “an innovation district.” The term, which was coined by the Brookings Institution think tank, refers to an urban office setting that mixes established anchor institutions with startup businesses, along with housing and retail.

A recent report commissioned by BioCrossroads cited the lack of an innovation district as one reason why Marion County has, since the Great Recession, struggled to add residents with bachelor’s degrees and high-paying jobs requiring at least that much education.

“What is essential for the Indy Metro is creating the larger ecosystem of innovation activity that can enable the region’s anchor research and innovation drivers to more effectively shape the local economy to retain and attract high skilled talent by creating more job opportunities,” wrote Mitch Horowitz, a consultant for Ohio-based Battelle, which produced the report for BioCrossroads. “The Indy Metro must catch the wave of Innovation District developments taking place across urban areas, such as Raleigh, Seattle, Atlanta, and San Francisco.”

16 Tech will be the home of the Indiana Biosciences Research Institute, which aims to raise $360 million and hire 150 medical researchers.

Battelle estimated that 16 Tech could become home to more than 9,000 workers.

“A significant opportunity for creating such an Innovation District is found at 16 Tech,” Horowitz wrote, noting that 16 Tech is “located near the anchor research and innovation drivers in the Indy Metro and to the live/work/play developments found in downtown Indy.”