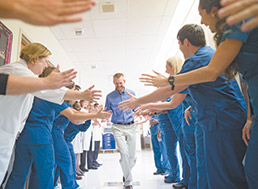 Brantly celebrated with staff at Emory University Hospital in Atlanta the day he was released. (Photo courtesy of Samaritan’s Purse)

Indianapolis native Dr. Kent Brantly, 34, was all over the national news a year ago after contracting Ebola while serving as a medical missionary in Liberia. He was flown back to the United States for treatment. Brantly and his wife published a book about the experience in July titled “Called for Life.” Brantly has lived in Fort Worth, Texas, since he earned his medical degree at the Indiana University School of Medicine. He now travels the country giving speeches for Samaritan’s Purse, the Christian aid organization that sent him to Liberia.

Are there things from your years in Indianapolis—your family, or Heritage Christian High School, or the IU School of Medicine—that helped prepare you for the experience you went through serving in Liberia and then battling Ebola?

I don’t think of any one experience in my growing-up years that I can point to that prepared me for Ebola. But it is a combination of the faithful heritage [of my family] and the influence of my aunts and uncles [who] encouraged me along the way.

Heritage Christian really broadened my view and my understanding of Christianity and the church. And I met people that were fervently trying to follow Jesus. That was huge for me.

My time at the IU School of Medicine—I went in hoping to learn a skill set that I could use to tangibly help those in need. Honestly, there are a lot of students in medical school that say, “I think I’d like to do medical missions,” but there are so many other pressures that that desire, that passion, often gets tucked away somewhere, washed away, or eroded somehow.

But I found mentors and classmates at IU that helped nurture that calling in my life.

What pressures move folks off a path of medical missions?

One obviously is money. The amount of debt that people accrue in undergrad and med school is such a very great pressure for people today. I was fortunate and really blessed because my parents helped me along the way with my debt. I had a substantial amount of debt but it was not an overwhelming burden like some people have, $200,000 or $300,000.

There are other pressures. People in medical school, they’ve worked hard for a long time. It’s very much the idea of delayed gratification. And when you’ve been doing that for a decade, you’re ready for a little bit of gratification. People say, “You know what? I’m not ready to step into another hard thing.”

What is the biggest health need in Liberia right now?

When you talk about Liberia, everyone thinks about Ebola, and how it has devastated the country and the health systems and its economy. And all of that is true. But there is a huge need there, and that need has only gotten worse because of Ebola.

The biggest health needs in Liberia are things like electricity, public sanitation, big-picture things that impact every aspect of life. The hospitals that they have there, they run on generators. It’s hard to make major advancements and offer high-quality medical care when you don’t even have consistent electricity.

Malaria is a huge problem and crisis. Lots of children weren’t vaccinated during the Ebola outbreak, which can kill more people than Ebola.

What’s the most common question you get after your experience with Ebola?

A lot of people ask me about my faith bringing me through Ebola. Like, “How big a role did your faith play? Do you think your faith saved you?” And I really think, in a very real way, that it’s my faith that got me Ebola. My attempt of living out faith put me in a place where I contracted the Ebola virus.

My hope wasn’t that my faith would cure me. It’s more like the story of Shadrach, Meshach and Abed-Nego [whose faith didn’t hinge on whether God delivered them from death]. And even if He doesn’t [heal me], I want to remain faithful. The reason I bring that up is because it’s a hard question for me: My faith and my survival, [yet] all the others that died.

How did your Christian faith motivate you to go serve in Liberia in the first place?

That’s a hard question to answer, because my faith motivates everything about who I am. To me, it is one integrated picture: What does it mean in my life to follow Christ? To serve people in need. I’m a doctor, and I need to go where people are suffering. I need to enter into their suffering with them. And I’m doing that because the love that Jesus showed me, I want to share with them.