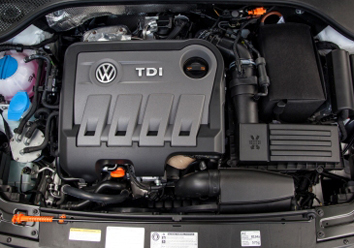 Volkswagen could compensate owners of diesel-powered cars that emit high levels of pollutants, possibly by paying them for the lost value of their vehicles, the company's top U.S. executive said.

Speaking to lawmakers investigating the emissions cheating, U.S. CEO Michael Horn also said fixing most of the 500,000 affected cars in the U.S. could take one to two years, possibly more. The fix, he said, would not hurt fuel mileage, but it could hinder the cars' performance, knocking one or two miles-per-hour off the top speed.

"There might be a slight impact on performance," Horn said Thursday to a subcommittee of the House Energy and Commerce Committee.

Horn told the committee that VW hasn't calculated how much value the scandal has cost owners of the affected cars. But earlier this week Kelley Blue Book said the value of VWs with 2-liter diesel engines had fallen 13 percent since mid-September. Used car values often drop in the fall, but the VW diesel drop was unusually large.

VW has admitted to installing so-called defeat devices on Volkswagen and Audi cars with four-cylinder diesel engines dating to the 2009 model year. The devices — actually software code — switch on pollution controls when the cars are being tested, but turn off the controls when the software determines that the cars are back on real roads. Affected models include the Jetta, Golf, Beetle, Passat and Audi A3. VW has said a total of 11 million cars worldwide have the software worldwide.

Horn said software changes alone will work to fix newer models, but 430,000 cars dating to 2009 will need mechanical repairs that are still being developed. Horn said engineers are working on either a larger catalytic converter that would treat nitrogen oxide, or a system that injects a chemical called urea into the exhaust.

Rep. Morgan Griffith, R-Va., asked if the urea system would require an extra storage tank that would take space from the cars' trunks. That also could affect the cars' value.

EPA Director of Transportation and Air Quality Christopher Grundler said the answer depends on the remedies VW offers to the agency. "We're going to take a very careful look at what impact this is going to have on owners," Grundler said.

Software alone will repair some newer Passat models, but they may need an additional sensor, Horn said. He didn't have an exact timeline on when the repairs might take place, but said it could take multiple years to develop the fix, get government approval and distribute parts to the company's U.S. dealers. The fixes may take five to 10 hours per car for dealership mechanics to complete, he said.

Horn conceded that the $7.3 billion (6.5 billion euros) VW has set aside so far to pay for the scandal may not be enough. Ultimately, the total cost will depend on fines from government agencies, how much it costs to fix the cars and the price tag for any compensation to customers.