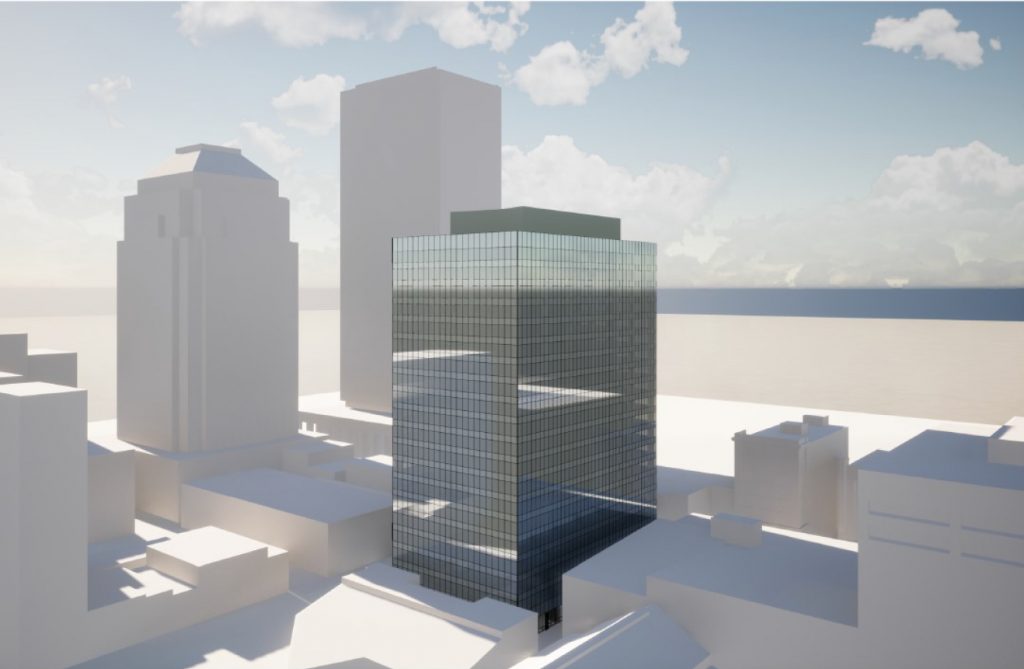 A rendering of Market Square Center, 151 N. Delaware St., with a new facade. (Rendering courtesy of City of Indianapolis/DKGR)

The owners of the downtown office tower known as the Gold Building plan to spend up to $55 million to revamp the iconic 20-story structure, along with two others buildings they own in the same block.

The renovation plan comes more than a year and a half after Indianapolis-based Gershman Partners and Citimark bought the Gold Building at 151 N. Delaware St. and the 11-story office building at 251 E. Ohio St.—plus the parking garage between the two buildings—for a combined $30.8 million.

The work would include replacing the taller building’s gold-plated exterior, as IBJ first reported in May. It also would entail upgrading the 200,000 square feet of office space in 251 E. Ohio St., as well as adding about 12,000 square feet of retail space to the building’s ground floor along Wabash Street. The street runs between the buildings and the City Market and is open only to foot traffic.

The firms are asking the city of Indianapolis for a $10 million tax abatement on the planned improvements, which would take place over the next 10 years.

City staff anticipates the improvements to the properties will result in an increase of about $41 million in assessed value, with the owners still paying about $12 million in taxes on the project over the 10-year abatement.

Once the abatement period expires, the owners will pay about $1.3 million annually on the improvements.

The Indianapolis Metropolitan Development Commission is expected to hear more about the owners’ plans and the abatement request during its meeting on Dec. 16. City staff has recommended approval of the abatement.

The petitioners say the project will create at least 800 jobs, but city filings do not indicate whether they would be involved with the renovation or would be office workers in the buildings for the petitioners or tenants.

Gershman representatives did not return calls and messages requesting comment for this story.

The Gold Building’s exterior overhaul, approved by the MDC in June, is expected to completely replace the iconic gold panels with “crystal gray” panels from the third floor through the 20th, along with snap-on mullion caps that match the new glass. An alternate plan also calls for spandrel, or opaque, glass on the first two levels of the building to replace metal paneling.

At the time of the purchase of the three buildings, Gershman principal Eric Gershman said there would be a focus on keeping the buildings primarily for office uses, while improving the street-level portions “to make it more connected to the neighborhood.”

The retail redevelopment of Wabash Street is expected to cost about $2.5 million, according to filings. The firms are expected to work closely with the city and City Market, which owns part of the alleyway, on those redevelopment efforts.

The Gold Building, constructed in 1975 and designed by Indianapolis firm Wright Porteous & Lowe, has about 420,000 square feet of office space. It’s the 9th-largest office complex in downtown, and 251 E. Ohio St. is the 17th largest. Both are about 65% occupied, according to IBJ research.

Indianapolis-based firm DKGR is the architect on the redesign of the properties.