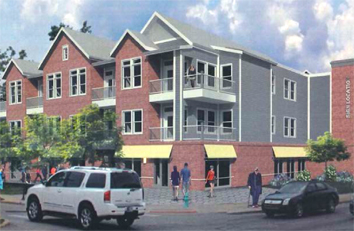 Three Ransom Place residents are challenging the city’s approval of a large residential project planned for the neighborhood and are asking a Marion County judge to stop the $10 million development.

In a highly unusual move, the residents are asking Judge Thomas J. Carroll to revoke IHPC’s approval and issue a stay to prevent work on the project from starting.

“These [IHPC] cases are rarely appealed,” said Mary Solada, a real estate lawyer at Bingham Greenebaum Doll LLP, who is not involved in the dispute. “There still must be issues and concerns about the design and density, I would guess.”

Olaf Lava received approval from IHPC in early November to build its project along Martin Luther King Jr., California and 10th streets on downtown’s northwest side. The development includes a four-story building with 27 units and a three-story structure with 19 units, in addition to four single-family homes.

Olaf Lava first approached IHPC in May with plans for a bigger residential development before offering a scaled-down version that the IHPC ultimately supported. Changes that came as a direct response to neighbors’ concerns included turning two duplexes slated for California Street into four, four-bedroom homes.

In their suit filed on Dec. 4, the residents say they “did everything they could to voice their opposition to the proposed development,” including writing letters to IHPC members expressing their concerns about the project’s density.

“If you go to Ransom Place, and you go to the lots where they’re proposing to put those buildings, you can see it doesn’t make sense,” said lawyer Jessica A. Wegg, who represents the residents.  “It’s already a super-congested part of town.”

IHPC members voted 6-1 in favor of the project, with Susan Williams casting the lone “no” vote.

Present-day Ransom Place represents what remains of a once larger African-American neighborhood where many of the city’s black leaders lived during the early part of the last century.

IHPC in 1998 adopted a Historic Area Preservation Plan to help protect the neighborhood.

In their complaint, the three Ransom Place residents suggest race might have been a factor in IHPC’s decision to approve the development.

“There is a very real concern that the residents of Ransom Place are not receiving equal protection under the law because of their race,” the suit says. “If racial discrimination played even a small part in the IHPC’s decision to issue the certificate of appropriateness, it must be reversed.”

Messages to the city’s corporation counsel and to developer Olaf Lava were not returned.

Judge Carroll has yet to take any action on the complaint, and the project will remain in limbo until he issues a ruling.