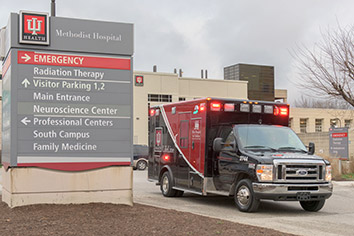 Now, it’s simply offering to give patients a ride.

IU Health effectively started its own ambulance service in December by adding two ambulances to its long-standing LifeLine critical-care service and opening a call center to help other health care providers figure out what level of transport services a particular patient needs.

That was the same basic goal IU Health had as it acquired 10 hospitals from 2002 to 2011, as it folded more than 1,550 physicians into its own IU Health Physicians, and as it changed its name in 2011 from Clarian to IU Health and launched a multimillion-dollar advertising campaign.

“We’re going to pick up a little bit of that business,” said Scott Brenton, IU Health’s vice president of ambulatory services, referring to the non-emergency transports of patients between hospitals, nursing homes and surgery centers. “And we can do it at a lower cost than we reimburse others for providing those services.”

IU Health also hopes to help patients get the right level of care even before they arrive at an IU Health facility.

But longer term, IU Health executives hope their call center gives them insights into how medical transport changes under the pressures of health care reform.

With the federal Medicare program and private health insurers pressing hospitals to keep patients out of the hospital, to send them home sooner, and to reduce the number who come back, transporting sick patients effectively to and from lower-cost health care facilities could become a key, low-cost way to meet those demands.

Doug Leonard, president of the Indiana Hospital Association, said some hospitals in other states are even sending paramedics to check on patients in their homes, before they even need an ambulance.

Before the December expansion, the IU Health LifeLine service operated six helicopters and six “mobile ICUs”—ambulances with extra equipment and higher-level staff that provide critical-care services. But now it has added two ambulances that will provide the basic life support and advanced life support of traditional ambulances, using EMTs and paramedics.

It also opened a call center where health care providers can call for consultation on a patient’s transport-services need—even if the answer is a non-IU Health ambulance service.

Nine hundred fifty-nine entities are certified to provide ambulance services in Indiana, about 400 of which are actively operating, according to the Indiana State Department of Health and the Indiana Department of Homeland Security. They range from township fire departments to private ambulance companies to high-end services like LifeLine.

Leonard, the hospital association president, called it a “patchwork” of services that police officers, firefighters and health care workers navigate.

IU Health hopes to offer outlying hospitals a more certain service—especially for their most fragile patients. Teri Grau, director of the IU Health LifeLine service, emphasized that IU Health’s ambulance staff all go through extensive training and many have several years’ experience treating patients in a hospital.

“We’re able to open up the front door of Methodist Hospital and take that to wherever the patient is,” she said.

Referrals from hospitals statewide are already key for IU Health to keep the operating rooms and patient wards full at its three downtown hospitals—Methodist, University and Riley Hospital for Children.

Those referrals have been beefed up considerably since the late 1990s as IU Health acquired 10 hospitals spread as far south as Paoli and as far north as LaPorte. IU Health also built three hospitals, in the Indianapolis suburbs of Avon, Carmel and Fishers.

But the number of patients checking into its downtown hospitals has been in decline, as technology has allowed more surgeries to be performed as outpatient procedures and as Obamacare has spurred health insurance plans to award bonus payments to hospitals that reduce hospitalizations.

IU Health’s downtown hospitals admitted 51,828 patients in 2014, down 11 percent from 2010. And they had declined another 2 percent during the first nine months of 2015, the most recent data available.

Brenton, the IU Health executive, hopes the LifeLine expansion puts IU Health in a better position for what’s coming next in health care, even if it’s not clear yet what that is.

“We’re going to gain a lot of intelligence by really being the clearinghouse for tens of thousands of transports a year,” he said. “We’re really excited about what that information’s going to tell us.”

Brenton also acknowledged this move could cost some of IU Health’s existing ambulance providers some business, most notably Louisville-based Care Ambulance. Mike Gilbert, the head of Care Ambulance, declined to comment for this story.

The volume of LifeLine’s ambulance service has already exceeded expectations. IU Health executives expected to make four runs a day in December, and hoped to grow that number eventually to eight. But in the first three weeks, the service was doing nine runs per day.

That pace would exceed the 3,000 runs per year IU Health set as a goal, which would add to the 4,000 runs it already does via helicopter and mobile ICU.

IU Health is pitching the LifeLine personnel as better trained and, in many instances, having higher qualifications than is standard for ambulance services. The LifeLine service now employs 225 people, up from 200 before the expansion.

Its officials think the need for higher-level care is growing as many county-owned hospitals have scaled back services, such as OB/GYN care, or don’t provide critical care. “The health care environment is really dynamic right now,” said Grau, LifeLine director.

“There’s been many private ambulances that have come and gone throughout the state of Indiana,” Grau said. “We’ve seen a lot of inconsistency result.”

Randy Seals, head of Seals Ambulance in Indianapolis, said Indiana’s Medicaid payment rates have been stuck at the same level for more than 20 years. He noted that most privately insured patients have family support to handle their transportation needs. Seals sold itself in 2014 to Tennessee-based Priority Ambulance, but continues to operate fairly independently.

And the total number of ambulance transports is several times higher, because the majority of runs aren’t for emergencies but are to transport very sick or weak patients between health care facilities safely.

Seals, the ambulance CEO, said his business in central Indiana has been growing as the number of hospitals and free-standing emergency rooms has risen over the past decade.

IU Health’s leaders also suspect transport will be a growing field—particularly in the non-emergency areas.

“We hope that, by becoming that clearinghouse for transport, we learn an awful lot,” Brenton said, “and to the extent that there are opportunities to provide better care, we could take advantage of that.”•