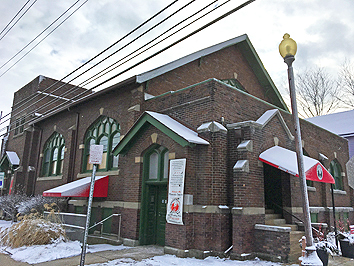 The Phoenix Theatre has taken a major step forward in its plan to move from its longtime downtown location in the Chatham Arch neighborhood by purchasing three properties on North Illinois Street.

Since 1988, the 33-year-old professional theater has staged its productions from the old St. Stephen’s Missionary Baptist Church at 749 N. Park Ave., about a block north of Park's intersection with Massachusetts Avenue.

“Parking has become a nightmare,” he said. “It has become such a problem that we’re looking at a 3 percent decrease in business if we stay here.”

The Phoenix paid at total of $1.8 million for the three properties on North Illinois Street and closed the sale on Wednesday. The purchases, from two separate sellers, were made possible by a gift from a large donor, Fonseca said.

Directors of the not-for-profit, meanwhile, hope to finalize the sale of the Phoenix building to “an interested buyer” within the next 30 days, Fonseca said.

The 6,700-square-foot church building likely would be converted to condominiums, sources said.

Phoenix directors plan to enter into a leaseback agreement with the new owner until they move theater operations to Illinois Street. Timing remains uncertain until directors determine whether to build a new theater or renovate an existing building.

A decision should be made within the next 90 days, Fonseca said.

The properties the Phoenix bought include the building at 705 N. Illinois St.—a 9,500-square-foot meeting and event venue known as the Auto Vault. The theater also purchased the vacant site to the north at 709 N. Illinois St., where the Gatling Gun Club building stood, and the parking lot across the street at 712 N. Illinois St.

The Phoenix currently  presents productions in the church building from two stages—the 135-seat Livia & Steve Russell Stage on thge main level, and the 75-seat Frank & Katrina Basile Stage in the basement. On Illinois Street, the Auto Vault building could be renovated for the small stage and another newly constructed building on the former Gatling Gun club site could house the larger stage, Fonseca said. Or, both stages could be located in one, new building.

“We will do our best to recreate [the current format],” he said. “We’re not looking to build a larger performing arts center.”

Still, the Phoenix expects to triple the size of its current, 6,700-square-foot home by adding more office, shop and tech space.

The church building on Park Avenue was constructed in 1907 and was vacant when a supporter donated it to the Phoenix in 1988—a few years before the city began efforts to gentrify Mass Ave. The Phoenix had spent the previous five years at the former Ambassador building north of the Central Library.

The Phoenix is one of only a handful of fully professional theaters in Central Indiana paying actors, crew, and staff. It focuses on contemporary plays and musicals, and regularly stages regional and world premieres. Attendance at its shows totaled more than 15,100 during its 2014-15 season. Seasons runs from September to August.

The Phoenix typically produces a total of 10 shows a year on the two stages that run four to five weeks each. It operates on an annual budget of $850,000, of which more than half is generated from productions.