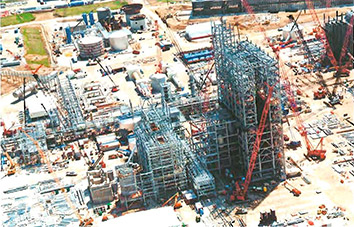 The bitterest foes of Duke Energy Corp.’s Edwardsport coal-gasification plant have agreed to drop their objections and join a settlement that would resolve many of the issues over how much ratepayers will be charged.

The utility announced Friday that four consumer and environmental groups—Citizens Action Coalition, Sierra Club, Save the Valley and Valley Watch—have signed a settlement that was first announced in September.

The move represents a dramatic shift for the groups, which first tried to stop construction of the 618-megawatt plant, then objected sharply for years over whether customers should be forced to pay for cost overruns.

The development likely means an end to all serious opposition to the $3.3 billion plant, one of the most expensive projects in Indiana history, which has been mired for years in controversy and cost overruns.

As a result of the settlements, the company has agreed to swallow $87.5 million of plant operating costs that were deferred since the plant went into service in 2013.

That’s $2.5 million higher than the original $85 million under the September settlement. Duke Energy originally wanted to pass those costs along to ratepayers.

Kerwin Olson, executive director of Citizens Action Coalition, said he agreed to drop his objections as a way of winning more savings for customers.

“It’s the right thing to do,” Olson said. “This helps us get some additional protections for ratepayers and gives us time to breathe and move onto other issues.”

The groups had earlier ridiculed the plant as a “boondoggle” and a “science project,” and said it was using questionable technology on a huge scale. The plant, near Vincennes in southwest Indiana, is the largest of its kind that generates electricity by converting coal into a combustible synthetic gas to drive turbines.

In addition, the groups had objected to a series of huge cost overruns, and filed numerous challenges in court and with Indiana utility regulators to sharply limit how much ratepayers would be charged.

The disagreements hit a fever pitch over whether the plant was truly “in service” as early as 2013. They said the company declared the plant in service before it was really ready to run as a way to get around an earlier settlement agreement limiting how much it could charge ratepayers.

That’s because the agreement capped construction costs that Duke Energy could pass along to ratepayers at $2.595 billion, but did not cap operating and maintenance costs. The groups had been trying to stop the company from passing along tens of millions of dollars in extra costs to customers through higher rates.

In dropping their objections, the groups join a group of industrial customers and the state’s utility consumer advocate that have already agreed to a plan to mitigate rate increases.

In addition to mitigating rate increases, under the revised settlement, Duke Energy has agreed to:

— Stop burning coal by Dec. 31, 2022, at its Gallagher Generating Station in New Albany, in southern Indiana across the Ohio River from Louisville. The company said it had expected to retire the plant as early as 2019 because of environmental rules, but this agreement “now sets a firm date for how long the plant can operate,” regardless of environment regulation delays or changes.

— Allocate $500,000 for small-scale solar projects to be installed at churches, schools and other community sites.

“One of the key parts of the new agreement is help for our customers most in need,” said Duke Energy Indiana President Melody Birmingham-Byrd.

Duke Energy and the consumer groups filed the new settlement wit the Indiana Utility Regulatory Commission on Friday, and it is subject to the agency’s approval.

Tim Stewart, a lawyer for Lewis Kappes in Indianapolis, which represents the utility interests of large buyers of electricity, said the agreement could save industrial customers between $50,000 and $1 million a year.

“We still have the right to object to future costs if the plant does not perform at an acceptable level in the long term,” the office said in a written statement. “In the short term, however, we believe the agreement—including these new developments —is the right way to address the project’s issues and we hope to see it approved.”