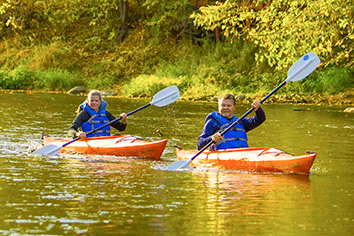 Hamilton County Tourism Inc. took a risk this year by completely changing its marketing strategy, and leaders of the tourism agency say it paid off.

Instead of advertising the area as a spring and summer destination in a variety of Midwest markets, the organization promoted fall travel and only targeted the Chicago area.

The campaign resulted in $156 in visitor spending for every $1 invested, according to research conducted by Indianapolis-based Strategic Marketing & Research Insights.

The organization spent $225,627, about 65 percent of which was devoted to TV ads. The budget also was used for magazine and digital marketing, such as Facebook ads. The research from SMRI estimates that trips influenced by the ads produced $35 million in travel revenue for the county.

The ads reached 945,000 households. The Chicago metropolitan area contains 3.1 million of what the tourism industry considers “traveling households”—those indicating that they travel or have the funds to do so.

“Chicago is just a big pot of gold up there, because there’s so many people,”  said Karen Radcliff, vice president and chief strategy officer for Hamilton County Tourism.

“We made a good decision to shift our ad buy into the fall,” Radcliff said.

Visitor spending on a per-advertising-dollar basis actually fell significantly from 2014, when visitors spent $250 per $1 in advertising. However, Radcliff was pleased with the results of the Chicago strategy because the ad spend was significantly less than in previous years but reached potential visitors more efficiently.

Hamilton County Tourism targeted at least six cities in each of the last two years, and the cost of reaching each household was higher. Last year, the organization spent $468,666 and reached 1.3 million households. In 2013, the campaign cost $469,632 and reached 724,000 households.

Radcliff said the agency probably will follow a similar fall-based strategy this year and spend time researching new marketing methods as a way to prepare for a shift in travel demographics.

“The travel market is going to start getting a lot younger,” Radcliff said.