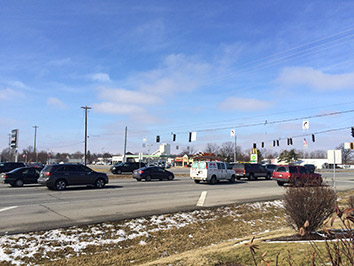 The city of Fishers is trying to solve a problem before it starts.

The municipality is investing tens of thousands of dollars in a consulting firm to address needs of the business community along State Road 37, which is expected to be redesigned into a free-flowing parkway, even though construction is two years down the road—at the earliest.

Local officials say the project, which would replace traffic lights from 126th to 146th streets with overpasses and roundabouts similar to Keystone Avenue or U.S. 31, doesn’t have to damage business along the heavily commercial corridor.

“There are some people that are obviously very emotional, very concerned about the project that just don’t want to see it happen,” Fishers Mayor Scott Fadness said. “But the vast majority in the middle agree that something needs to be done.”

The city’s efforts have been noted by the business community, but the message hasn’t convinced them yet.

A group of businesses known as the 37 Business Alliance formed shortly after state and local officials announced funding for the project two months ago, and it’s fighting to delay the project until alternatives can be thoroughly studied.

“We hope that we will have a voice,” said Bill Smythe, owner of Claude & Annie’s and 37 Business Alliance founder.

The seven-member governing body tabled a funding vote at its February meeting, and is expected to hold a public hearing in March. A vote could be taken then or it could be postponed again.

In an election year, stakes could be high for county officials. The three at-large council seats are up for grabs, along with two commissioner positions.

Smythe has filed to run against Commissioner Mark Heirbrandt in the Republican primary, but longtime commissioner—and project advocate—Steve Dillinger is unopposed. Smythe said he vetted candidates to run against Heirbrandt and Dillinger, but no one had filed the day before the deadline, which prompted him to run.

Many business leaders see the County Council decision as the last opportunity to voice an opinion. They argue that a lengthy construction period—projected to be three years—would significantly reduce the volume of customers traveling the corridor and that, after construction, vehicles would pass by without noticing the retail outlets.

Members of the alliance, which represents about 40 businesses, suggest widening parallel thoroughfares, like Allisonville Road, to divert traffic or adding lanes at some of the intersections along S.R. 37 to help push more traffic through each light cycle.

At the very least, business owners want those possibilities studied before more funding is dedicated to the existing concept.

“I think starting on Allisonville is the first step,” said Daniel Wilborn, general manager of Monical’s Pizza and the new leader of the alliance. “It would relieve the need to tear this road up.”

Local officials stressed that the project is in its earliest stages, and that the roundabout design is only a preliminary concept. But they also said it’s the best option, arguing that widening alternative routes or certain intersections would delay the need to fix S.R. 37.

“Hamilton County is going to continue to grow. At some point, you can’t add additional lanes,” Fadness said. “The more lanes you add, the more difficult it becomes for us to get east-to-west traffic back and forth.”

IBJ.COM EXTRA
See the map to find out what will be affected.

It could be worse

Heirbrandt said businesses are getting the best deal possible.

Under the agreement among Fishers, Noblesville, Hamilton County and INDOT, the city of Fishers will take over control of the roadway during construction and give it back to the state afterward.

That way, local officials argue, concerned businesses can talk to local representatives instead of the state about signage, access roads and timing of when intersections will be torn up.

Fishers plans to contract with RQAW Consulting Engineers & Architects to provide a contact person for the commercial corridor. Troy Woodruff, director of operations for the firm and former INDOT chief of staff and state representative, has already started working for the city, even though the contract has not been finalized or approved.

“We thought he had unique experience when it came to dealing with large INDOT projects,” Fadness said. “I think Troy is trying to hit the ground running.”

Woodruff resigned from INDOT in 2014 in the midst of a 19-month ethics investigation into state land purchases that benefited his family along the Interstate 69 corridor in southwestern Indiana. The state’s Inspector General’s Office determined Woodruff did not break the law but came “right up to the line.”

“I’m aware of it, but it wasn’t really a factor in making the decision,” Fadness said about Woodruff’s past.

The contract could cost $10,000-$15,000 per month, according to Jeff Hill, Fishers director of engineering.

Woodruff was not made available for comment on this story, but he attended the business alliance’s meeting Feb. 16 on behalf of Fishers. Deputy Mayor Leah McGrath also attended.

“The city deserves some credit for hiring someone to reach out,” Smythe said.

But the meetings haven’t been as productive as some had hoped. “He has listened to what I’ve had to say, but he doesn’t have answers,” Wilborn said.

Heirbrandt reminded business representatives at the Feb. 16 meeting that INDOT would have pursued some project on S.R. 37 in the future—one that could have converted all intersections to unpopular “Michigan lefts,” which replace left turns with a U-turn and right turn.

The Michigan left at the corner of 96th Street and Allisonville Road in Fishers has long been criticized by residents.

Heirbrandt said INDOT proposed the Michigan left solution when the county asked for financial assistance. That project would have cost $100 million, according to Heirbrandt, so local leaders instead secured that amount for the roundabout project.

“They want to do this with the whole corridor,” Heirbrandt said. “Now, do you think that’s beneficial to the business community?”

The suggested design is similar to Keystone Avenue in Carmel, which worries business leaders who point to some of the struggling Keystone retail centers, including Merchant Square at Keystone and 116th Street.

“That raises people’s concerns, but I think the changes that happened at Merchant Square are unrelated to Keystone,” said Tim Monger, president and CEO of the Hamilton County Economic Development Corp.

Construction on Keystone started in 2008 and finished in 2010—during the height of the Great Recession—and a few years after Simon Property Group Inc. opened the Clay Terrace shopping center at U.S. 31 and 146th Street in Carmel.

“I think it’s important for people to remember when that [Keystone] project happened,” Mike McBride, former engineer for the city of Carmel who oversaw the project, said during the business alliance meeting. “The economy was collapsing. … We were already starting to see vacancies appear from Merchant Square.”

Monger said the reconfiguration of S.R. 37 could benefit the commercial industry because it would provide easier access from all directions.

“The tone has been set at least for that stretch,” Monger said, referencing the corridor through Fishers and Noblesville. “It’d be hard to speculate if that would change in any significant way other than retail.”

Local officials also argue that businesses could be already losing customers because of people avoiding the congestion.

Business owners brush off that suggestion, saying the impact from construction and free-flowing traffic would be much worse, especially in terms of visibility.

“Those businesses will be just as visible post-construction as they are today,” Monger said. “It’s not like the businesses are going to be forgotten.”

Maintaining visibility is one reason the preferred design has the east-west roadways traveling above the highway, like Keystone, rather than under it, like the recently re-opened U.S. 31.

“Under is definitely better than over,” Wilborn said.

But no one is promising it will be easy for the businesses.

“If you own a business, I promise you there will be times when there will be some inconveniences,” Woodruff said at the Feb. 16 meeting for the business alliance.

Conducting an environmental study is the next step, but a company cannot be chosen until Hamilton County signs off on its portion of the funding.

Fishers is also not finalizing its contract with RQAW until the county dollars are secured.

“All of this is contingent upon the County Council’s approval,” Fadness said.

And that’s no guarantee. Councilor Jim Belden, who likely would have supported the funding, died Feb. 14 and his vacant seat has not been filled, leaving six active council members who could split 3-3.

“I don’t know what they’re going to do,” Heirbrandt said. “I hope they see the value in this.”

If the county money is secured, the environmental study could begin in March or April. Within two years, the road could be under construction.

The environmental survey would consider all options for easing congestion, including widening other corridors or possibly doing nothing.

Some businesses have suggested the county pay for the study separately—without committing $12 million to the entire project—so alternatives are reviewed before the existing proposal is approved.

But local officials say that’s not possible because the agreement that pledges $12 million has to be approved for the project to be eligible for state and federal dollars.

Fadness said the current design is the solution recommended by the 2012 mobility study Hamilton County commissioned.

“We are following the natural progression,” Fadness said. “You have to start somewhere. … I don’t think it’d be fair to residents to say, ‘We want to fix 37, but we don’t know how.’”•