Home » Developer ups pressure on airport to move ahead on project 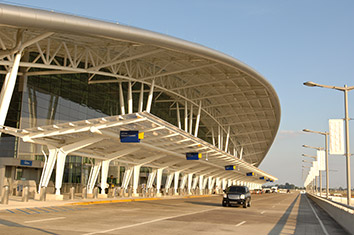 The company that has proposed developing a $500 million medical complex on land owned by the Indianapolis International Airport put pressure on airport officials Friday morning to make a quick decision on the project, warning that it would “explore other options.”

Later in the morning, it softened its tone.

The Indianapolis Airport Authority announced late Thursday that it would take more time to vet the proposal, postponing a planned vote on the matter at its Friday morning meeting. The decision came after IBJ published a story Thursday morning that questioned the financial stability of ABN and the management track record of its CEO, Craig Sanders.

In its statement Friday, ABN noted that it was "gravely disappointed" with the authority's decision but would “welcome the opportunity to have further discussions … about ABN’s qualifications and ability to deliver a successful project.”

“It is our hope that the Airport Authority will move diligently to answer any remaining questions that it may have so as to limit any damage to the current momentum behind this project,” the statement read. “While we respect the process the Authority believes is prudent, this delay necessitates our need to explore other options.”

Later in the morning, ABN retracted the last part of its statement. Myra Borshoff Cook, the spokeswoman for the company, told IBJ that officials decided the statement was "unnecessarily vague."

"ABN is committed to siting the project at the airport and will not entertain other options unless the Airport Authority determines not to proceed with our project," Borshoff wrote in an email.

The authority was set on Friday morning to consider approving a letter of intent with ABN Real Estate Group LLC to negotiate a contract and lease for the project. The deal would entail redeveloping about 130 acres of land near the airport’s old terminal. Sanders is proposing to build a massive medical campus with up to five office buildings and two hotels. He said the enterprise, when fully built, could employ 3,000 people, including doctors, nurses, technicians and support staff.

The center would specialize in the treatment and research of concussions, post-traumatic stress disorder, traumatic brain injuries and other brain health issues for athletes and veterans. It also would include an athletic stadium, sports-themed entertainment facilities and retail buildings.

IBJ’s story on Thursday revealed that the Sanders had a checkered financial history, with a business bankruptcy in 2009 and a personal bankruptcy in 2013. The story also raised questions about whether ABN had sufficient experience to build and operate a major health care development.

On Thursday night, the airport announced that it would spend more time examining the project.

“Since our announcement of the proposed ABN development on the grounds of our old airport terminal parking lots, we’ve heard from many in the community who are excited about the project, which includes a medical complex with a Global Center for Brain Health serving veterans, athletes and anyone facing concussions, PTSD, traumatic brain injuries and related health conditions,” the authority wrote in a statement.

It continued: “We have also heard from some in the community asking us to have more conversations surrounding the development. … With that in mind, the Indianapolis Airport Authority will delay the agenda item involving the ABN letter of intent at Friday’s board meeting so that we can further process community feedback and have additional conversations. We will have no other statements at this time.”

After ABN released its statement on Friday, an airport spokesman said the airport had no additional comment.

City-County Councilor Jared Evans on Thursday afternoon called for the airport to postpone the matter.

“While our community is certainly excited to see and hear about the proposed sports-centered medical facility, we do have questions and concerns that have recently been raised,” Evans wrote in a statement. “This morning, the Indianapolis Business Journal raised fair questions concerning the development and the developer. As a City-County Councilor representing the community and neighborhoods in the area of the airport and site of the future development, I respectfully ask that the Airport Authority board postpone their vote on this development until the project and financing can be fully vetted by community leaders.”