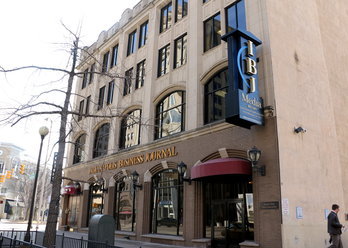 The 92-year-old downtown building that IBJ Media has occupied for nearly 20 years has been sold to the Drury Hotels chain.
Terms of the transaction, which closed late Monday afternoon, were not disclosed.
The four-story building at 41 E. Washington St. was owned by a group that includes IBJ Media co-owners Michael S. Maurer and Robert Schloss. The company, which publishes IBJ, The Indiana Lawyer and Court and Commercial Record, occupies the second floor.
St. Louis-based Drury approached the ownership group—which includes Maurer’s son Todd Maurer—late last year about selling the building, which wasn't on the market.
“They made an offer,” Todd Maurer said, “and we negotiated and came up with a deal.”
IBJ Media has occupied space since 1997 in the 65,000-square-foot building at the southwest corner of Washington and Pennsylvania streets. Other tenants include Morton’s Steakhouse, Hoosier State Press Association, Doyle Legal Corp. and Newmark Knight Frank Halakar. Todd Maurer is a principal at Newmark Knight.
The sale of the property to Drury includes the adjacent surface lot to the west.
Drury plans to convert the property to a hotel. A Drury official was not immediately available for comment on its plans.

The hotel company plans to honor existing leases and won’t start converting the building and lot into a hotel for at least three years.
IBJ intends to remain downtown, and will start looking for new space about a year before its lease expires in March 2019, IBJ Publisher Greg Morris said.
The one-block stretch from Pennsylvania Street to Meridian Street has undergone a revival since IBJ arrived. The only tenant in IBJ’s building at the time was the former Bank One Indianapolis, which rented 7,000 square feet in the basement, where Morton’s is now.
Other eateries such as Buffalo Wild Wings, Fogo de Chao Brazilian Steakhouse, Chipotle, Georgia Reese’s and Pie Five have opened in the area in recent years.
“This is not an abandonment of downtown but the continued redevelopment of the East Washington Street corridor,” Todd Maurer said of the decision to sell.
The Maurer group bought the building from a partnership including real estate investor Harrison Epperly.
It was built in by the S.S. Kresge Co.—one of the largest retailers in the country—which was renamed Kmart Corp. in 1977. Kresge occupied the building from 1923 until moving to West Washington Street in 1947. Later, the building housed the William H. Block Co.’s budget store.
The architect was D.A. Bohlen & Son, a well-known firm that designed many religious, commercial and residential buildings in the city. Among them: the Murat Temple, the Majestic Building at 47 S. Pennsylvania St. and Tomlinson Hall adjacent to City Market, which was destroyed by fire in 1958.
The building's assessed value is $4.8 million.
Because the building is within Indianapolis Historic Preservation Commission boundaries, renovations for the hotel conversion will need to be approved by IHPC.
IBJ Media, which also includes a book publishing division, has 55 employees.
Drury operates more than 130 hotels in 21 states. It operates two Indianapolis hotels, one at 9320 N. Michigan Road on the northwest side and another at 8180 N. Shadeland Avenue on the northeast side. It’s also building a hotel at 9625 N. Meridian St. near Interstate 465 that’s expected to open in the spring.